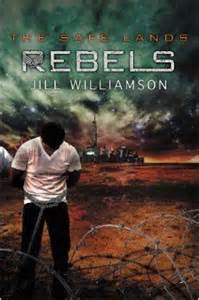 In the third and final installment of The Safe Lands Trilogy, Rebels, Omar and Mason have learned that liberation means being sent to the lowlands to work prison or the remainder of their days. Levi continues to try to lead and inspire his people while mourning the loss of his brothers. Shaylinn continues to focus on her pregnancy but longs to help with the rebellion and Jemma becomes the new Safelands queen when she is captured at the harem.

While Omar, Mason, and some others they meet in the Lowlands try to figure out a way to inform those in the Highlands and Midlands of the true meaning of liberation, Levi and the other outsiders are trying to live underground with a group called the Kindred—a group of people who are divided in their opinions of this new group of people invading their lives. Shaylinn’s babies threaten to come early and Jemma finds out good news which is manipulated over the airways to angry and place seeds of doubt in Levi’s mind.

The final book in this series is a quick read because there is so much going on. The point of view varies between five or six characters throughout the book (although mainly the three brothers—Levi, Mason, and Omar). I personally got a little frustrated with all of the love triangles and some of Omar’s decisions made me angry. The story came to a nice resolution even though I would have preferred a little more about the brothers and their lives once the rebel cause was no longer needed.

***BookLook Bloggers and Zondervan fiction provided me with a free copy of this book in exchange for an honest and fair review. I was not compensated in any way for either a negative or a positive review.