Another week has flown by, and since I spent the long weekend camping, I got zilch done on editing. On the bright side, if I work on two chapters a day this week, I’ll be through book four by June 1. Woo Hoo!! Once the entire book has been edited, I’ll order some proof copies, hand a couple of them out to beta readers, and set one copy aside to go through myself in another month. This will not only give me little break from this book, I will be through this project enough that I can focus on the next project. Book number five. The first one in my second series.

And here’s what I’m excited about with the new series. First of all, the first book, whose working title is currently Entertaining Angels, placed in the top 10 in a writing contest I entered. Man, that was so encouraging. Second, the focus I’ll be placing on book five right now will be sending it through a new critique group. This group is new to me but I’m very excited to have some published authors in the group who I know will offer great insight and opinions. Also, this series deals with some very difficult but very real subjects. Each of the titles for the books (and I’ve written three so far with plans for at least one more) has come from song titles. In case you’re wondering, book and song titles cannot be copyrighted. Because of this, I’m considering naming the series The Rhythm of Love (which is also a song).

So here’s an interesting (maybe only to me) tidbit about my fifth book. The title of the book actually came to me first. I was out walking one day with my iPod. I have some old school music on there (music from my college years), including some old Newsboys stuff. I mean like the Newsboys that was fronted by Peter Furler and had Phil Joel on the guitar. The song “Entertaining Angels” came on and I thought about the Bible verse about entertaining angels unaware. And then I decided it would be a great name for a book. But what about that book could relate to the title that had started to take root. Okay, my main character was somehow going to take care of children (because what better to draw an audience in that kids or puppies). Once I had that general concept, the rest of the story started flowing. I am excited about this one. I’ve learned so much about writing over the past couple of years, I hope mine is getting stronger. Spending time in critique groups is really challenging me to explain things better (show not tell, point of view, dialogue vs. backstory, etc.).

Let me leave you with the inspiration that started my second series.

Guess what? I’m still slugging away on edits for my fourth book. I made some pretty good progress this weekend while I was watching a friend’s dog. Her husky doesn’t try and sit on my lap like my little rat terrier does. Roxy does not like me working on my laptop because it means she doesn’t get lap time. Oh well, we all have to sacrifice.

So anyway, I’m up to chapter 41 in edits and have a little more than 100 pages to go. I’m hoping to get it under 100 before Friday since I’m going camping over Memorial Day weekend and won’t be able to work much there (although I may still take a hard copy to write over). Speaking of which, here’s a page of my edits from last week. 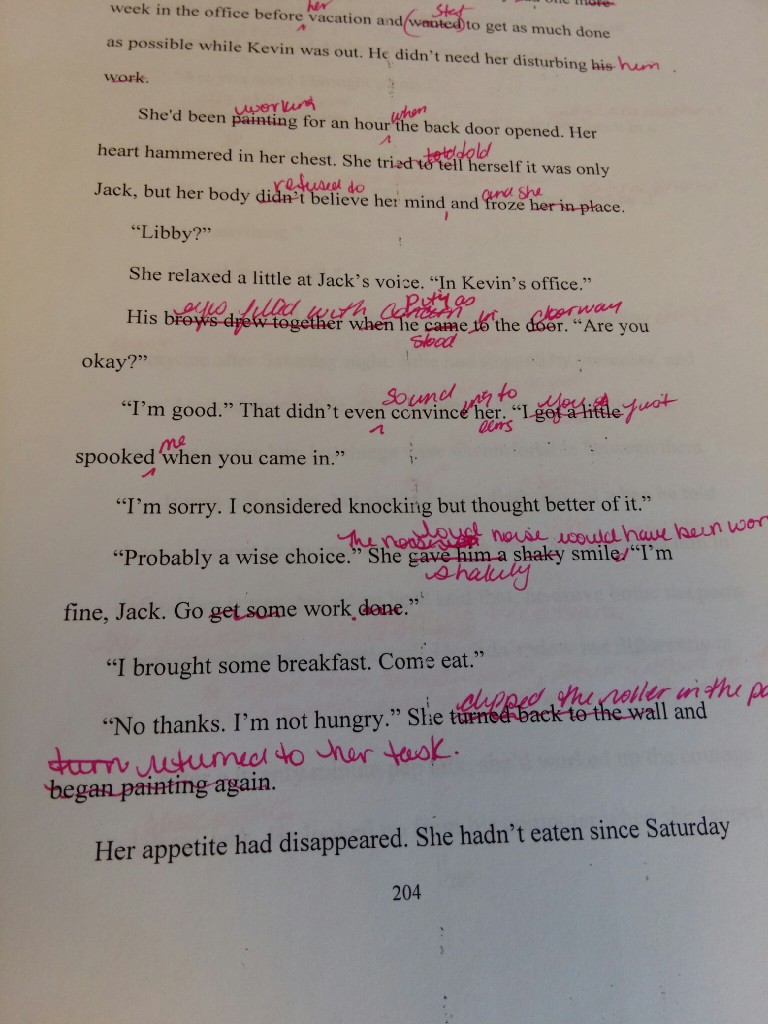 By the way, when I was writing this series, I did have an idea for a fifth book, but as I came to the end of Beauty from Ashes, I felt like it was a nice wrap up to the series. Readers who have read the other three books will get to catch up with all of the couples they’ve gotten to know as they read Libby’s story (if you read Pursued, you know that Libby is Callie’s sister).

No spoilers for you this week, though. Sorry, I’m in the middle of a pivotal scene and I don’t want to give anything away. Perhaps next week I’ll have a snippet for you.