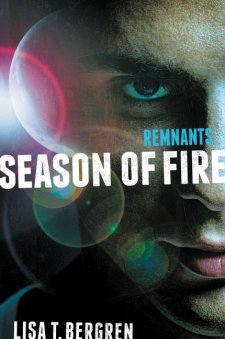 With the popularity of dystopian young adult novels, it isn’t a surprise that the genre has entered the Christian fiction market. I’ve read and enjoyed the trilogies: Hunger Games, Divergent, and Legend. What do you think it is about these books that draw people in? A young person bringing hope to a people? Someone rising above, taking a stand for what they believe is right? The action? In truth, it’s most likely a combination of these things.

I’ve known about Lisa T. Bergren’s Remnants series for a while. I even downloaded the first book on my Kindle a few months ago but my TBR pile is forever growing and I just hadn’t gotten to it. When I was given the opportunity to review the second book, I took it. It took three pages before I realized I needed to read the first book or I would be lost. After reading Season of Wonder, I was into the story and picked Season of Fire (book two) up immediately. Now the waiting begins for the final book in The Remnants Trilogy (sigh).

Andriana is a Remnant, a girl with the gift of empathy who has a high calling from the Maker. She and her knight, Ronan, have joined with other remnants (each with their own unique gift—healing, discernment, a seer) and knights to fight for the Maker’s glory. Ronan and Andriana have admitted they love each other but now have the struggle of riding themselves of that love because their enemy will use it against them. When Andriana is taken captive by Keallach (another remnant who has ignored his calling), she is challenged more than ever before. Separated from her friends and Ronan and determined to show Keallach the way back to the light, Andriana struggles with succumbing to his influence instead of swaying him to her side. Will she succumb to Sethos’s evil power or rely on the Maker to lead her through the darkness.

Unlike Season of Wonder, the second book in the trilogy gives the reader two points of view (both Andriana’s and Ronan’s while they are separated). This makes the book more rounded as the reader gets to follow both Andriana’s progress as well as her follow remnants. The story moves fast with a good balance of action and internal struggle throughout, and Bergren keeps you guessing as to which side Keallach truly belongs to. If you are looking for a good read for a teenager (or if you like YA books), this is a good choice with an uplifting, Christian message.

****Booklook Bloggers provided me with a free copy of this book in exchange for an honest review. All opinions expressed are my own