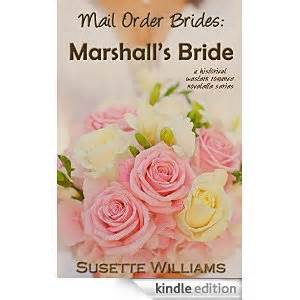 This collection of short novelettes follow the Kincaid brothers as each of them find a wife. Some exactly as you expect, others in a little more unconventional manner.

Jessie Kincaid may be the youngest, but he’s not going to wait for his other three brothers to marry before he does. Already in love with the beautiful woman he’s been writing, he’s excited to learn she’s coming to town sooner than expected but also nervous about telling his Ma about Sarah. But while Sarah hopes to marry Jessie, her pa has other plans for her. Plans that include marrying a wealthy man who will take care of the rest of her family as well as her.

After Jessie’s marriage, Montana decides he is ready to settle down with a wife of his own. He’s learned from his brother’s mistakes, though, and makes certain to inquire about Mary’s family. Mary has been honest with him about her family, but when a man her uncle wanted her to consider as a suitor doesn’t seem to understand she has chosen someone else, she arrives in House Springs, Missouri sooner than planned. What she doesn’t know is that someone has followed her there.

Unlike his brothers, Caleb Kincaid is in no hurry to get married. Now that two of his brothers were married, he had to entertain himself. When he wins a card game, he finds he has also one his opponent’s mail order bride. Naomi’s life has been gambled away two too many times—once by her father and now by her potential husband—but she is grateful she does not have to marry the older Jacob. But will Caleb Kincaid make good on the promise made to her by another man?

The eldest of the four brothers, and the only one who does not live at home, Marshall Kincaid shelters his family as best he can from his occupation. As the town Sheriff, one of his brothers has already been placed in harm’s way. There is no way he will subject a wife to the dangers of being married to a law man. When he returns from out of town business, he’s shocked to learn his mail order bride has arrived in town. A bride he’s never heard of or written to once. Lizzie is still grieving her husband who died during their passage to America from Ireland but realizes she needs a husband to care for her in order to survive. Judging from his letters, Marshall is just the man. But will he marry someone he knows nothing about?

Each of these stories was short and sweet with a pinch of humor. Caleb’s and Marshall’s stories were by far my favorite because their brides came to them in a little bit of an unconventional manner. While each of the brothers finds obstacles to overcome with their brides, their family bond is strong. Clean and family friendly, this collection is a fun, light read for anyone who enjoys peeking into the past, a little bit of humor or suspense, or anyone who is just looking for a happy romance.