Someday I hope to visit England. Ever since my first read of Jane Austen’s Pride and Prejudice, I’ve been fascinated with stories set in the country known for its gloomy weather, nobility, and sprawling landscapes from London to the northern region by the sea to the countryside. Whether it’s a regency novel, contemporary, or Edwardian, I love reading about the people and places in the UK. Rosanna M. White’s The Lost Heiress, set in the Edwardian time period, did not disappoint with plenty of relationship, romance, and intrigue. 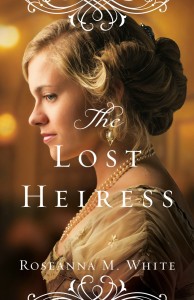 Raised by the Grimaldis in Monaco, Brook Eden has never fit in. Not with the royal family and not with the regular townspeople. When she asks her best friend Justin to look into something she found in her mother’s things, he returns from England with news that she does indeed have a family. Yet, not everyone in the household is as certain as her father that she is, indeed, the lost Baroness of Berkeley.
As Brook settles into a new life with her father and other relatives, Justin Wildon struggles with loss of his own and his new role as the Duke of Stafford. A role which takes him away from the young woman he has grown to love as more than a friend. But fear of what may appear as a convenient match as well as uncertainty of his Brook’s feelings, keeps him from declaring himself.
Despite her new home and wealth, Brook is tormented by nightmares and the mystery of her mother’s death. Why was she fleeing in the middle of the night with Brook? And when she is attacked by a man demanding something she doesn’t have, things get really interesting.

Written from three points of view—Brook, Justin, and Brook’s maid—The Lost Heiress drew me in from the first pages. Brook’s propensity to involve herself in dangerous activities, her kindness, and her courage give her depth. As does her confusion with Justin and the other men who surround her in her new life. Justin’s steadfastness and commitment to the dukedom make him the perfect compliment to Brook. Deidre O’Malley, the maid, struggles with her new mistress and has to decide whether to confide in her or not.

White states in a letter to readers at the end of this book that she began the story when she was twelve and through many, many rewrites, the story evolved into the beautiful book that is now available to readers. This one was worth the wait and I am looking forward to the next one.

***Bethany House provided me with a complimentary copy of this book in exchange for an honest and faire review. All opinions expressed are my own.