Every month I watch for a new book in Christy Barritt’s Lantern Beach series. Why, you ask? Because I like this cast of characters, the storyline, and the suspense. Since January, I’ve been waiting for Cassidy’s past—the one she’s hiding out from—to catch up to her. Not to mention for her to open up to Ty (because he’s a good man who I know will have Cassidy’s back).

Well, readers. The wait is over! When Cassidy spots one of the top guys from DH-6, the gang that has put a bounty on her head, she realizes her past and present are about to collide.

Dangerous Waters starts with Cassidy and Ty enjoying their new relationship. One that is soon in jeopardy with the newcomer. But it’s not only the relationship that’s in danger. Every friend
Cassidy has made in Lantern Beach is now a target.

Barritt does an excellent job of playing a bit of a mind game with readers, making them question whether the man Cassidy recognized is truly who she believes him to be. Add to that the delicate balance of investigating while keeping her cover and balancing this new rocky landscape with Ty, and Barritt delivers another hang-on-tight-and-don’t-let-go story that ends much too seen.

The good news? There’s more of Lantern Beach to come because there’s still a mystery to be solved.

My Rating:
Disclosure statement:
I receive complimentary books from publishers, publicists, and/or authors, including NetGalley. I am not required to write positive reviews. The opinions I have expressed are my own. I am disclosing this in accordance with the Federal Trade Commission’s 16 CFR, Part 255. 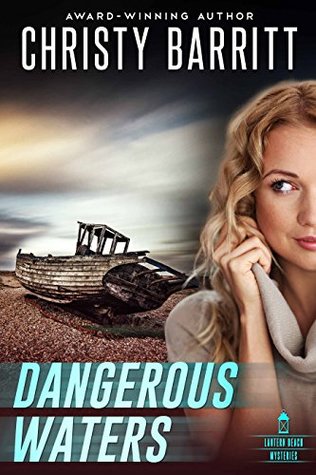 Danger lurks on the horizon, leaving only two choices: find shelter or flee.

Cassidy Livingston’s new identity has begun to feel as comfortable as her favorite sweater. She’s been tucked away on Lantern Beach for weeks, waiting to testify against a deadly gang, and is settling in to a new life she wants to last forever.

When she thinks she spots someone malevolent from her past, panic swells inside her. If an enemy has found her, Cassidy won’t be the only one who’s a target. Everyone she’s come to love will also be at risk.

Dangerous waters threaten to pull her into an overpowering chasm she may never escape. Can Cassidy survive what lies ahead? Or has the tide fatally turned against her?

Other books in series:

Woo-hoo! Who else is excited whenever they see a favorite author starting a new series? I love Christy Barritt’s characters and her continuity series. After reading the first book in her Lantern Beach series, I am (impatiently) waiting to get my hands on the next one!