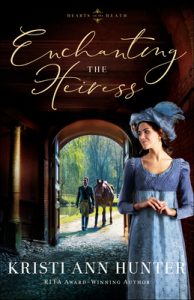 Miss Harriet Hancock enjoys playing the role of eccentric heiress, using her wealth and influence to cleverly and anonymously better the lives of those in Newmarket. Though she keeps people at a distance to protect a years-old secret, when her friend pleads for help on a personal project, Harriet can’t resist.

Stable hand Jonas Fitzroy would do anything for his twin sister, even if it means seeking out the woman whose meddling ways have made him wary and suspicious. The last thing he expects is for Miss Hancock to request his help in writing a book. Intent on revealing her underlying plan, Jonas agrees.

As they work together, an unexpected friendship forms. But when things for once don’t go according to Harriet’s plan, she’s left wondering if good intentions might not be enough. Is there a way to mend the broken pieces of her life? And will Jonas give her another chance at his heart?

END_OF_DOCUMENT_TOKEN_TO_BE_REPLACED 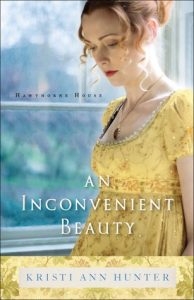 Griffith, Duke of Riverton, likes order, logic, and control, and he naturally applies this rational approach to his search for a bride. He’s certain Miss Frederica St. Claire is the perfect wife for him, but while Frederica is strangely elusive, he can’t seem to stop running into her stunningly beautiful cousin, Miss Isabella Breckenridge.

Isabella should be enjoying her society debut, but with her family in difficult circumstances, her uncle will only help them if she’ll use her beauty to assist him in his political aims. Already uncomfortable with this agreement, the more she comes to know Griffith, the more she wishes to be free of her unfortunate obligation.

Will Griffith and Isabella be able to set aside their pride and face their fears in time to find their own happily-ever-after?

END_OF_DOCUMENT_TOKEN_TO_BE_REPLACED 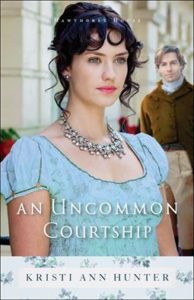 Life for Lady Adelaide Bell was easier if she hid in her older sister’s shadow–which worked until her sister got married. Even with the pressure of her socially ambitious mother, the last thing she expected was a marriage of convenience to save her previously spotless reputation.

Lord Trent Hawthorne couldn’t be happier that he is not the duke in the family. He’s free to manage his small estate and take his time discovering the life he wants to lead, which includes grand plans of wooing and falling in love with the woman of his choice. When he finds himself honor bound to marry a woman he doesn’t know, his dream of a marriage like his parents’ seems lost forever.

Already starting their marriage on shaky ground, can Adelaide and Trent’s relationship survive the pressures of London society?

How have I not read anything by this author before? I loved, loved, loved this book. In fact, I enjoyed An Uncommon Courtship so much, I immediately ordered the first two books in the series once I’d reached the end.

Adelaide, with her penchant for clumsiness, is likable from the get-go despite her annoying mother, and I couldn’t help but feel for her situation. It took me a little longer to warm up to Trent Hawthorne (and if I’d read the previous books in this series, I may have had a different opinion of him at the beginning of the book).

The tension between two strangers who now found themselves married was palpable, neither one knowing how to interact with the other, afraid of doing something wrong. Their friends and family added to the stress of the marriage (both those who supported them and those who were a sore spot).

And I have to say it was nice to read a book set in the Regency period that focused on the day-to-day interaction instead of someone trying to steal, overthrow, or besmirch another member of the ton (there was the smallest hint of that last one, but it wasn’t the main plot of the book).