After an extremely productive New Year’s day, I decided I had earned an evening to sit back, relax, and enjoy a good movie. My roommates were all out for the night so I had this cutie. 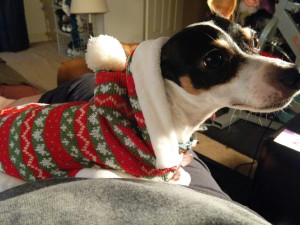 That’s Roxy in her Christmas sweater. The pup loves nothing more than to sit in someone’s lap so she was perfectly content while I watched a movie. 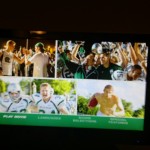 I believe I’ve mentioned before that my tastes in movies tend to lean toward what guys liked to watch. My video collection consists mainly of action, suspense, or sports movies so When the Game Stands Tall from Affirm Films and starring Jim Caviezel, Laura Dern, and Michael Chiklis was something I knew I would enjoy.

High school football coach Bob Ladoucer coached the De La Salle Spartans to a record winning streak of 151 games. This movie is not about the 151 games but about what happens when the glory fades and life pushes in to dull the luster of accomplishment.

“Don’t let a game define who you are. Let the way you live your lives do that.” –Assistant coach Terry Eidson

This is a movie you do not want to watch half heartedly. There is a lot going on. Between the coach’s family life and his heart attack, the dynamic between the players (the whole team as well as friendships), and the pressure of the community on a high school football team, there is a lot to keep track of. Filled with the usual sports movie clichés–the kid who is too good for the rest of the team who turns around in the end, the kid everyone perceives as a loveable idiot with a big heart, and the workout and game montages–When the Game Stands Tall is also full of motivation, faith, and compassion. When the team visits a VA hospital and spends time with veterans who have lost their limbs in war, there are several humorous moments that will have you laughing. And when tragedy strikes the team, you will be in tears.

“People always ask me what it’s like to never lose. Today I am lost. It’s as if life has taken more than it gives and I don’t know if I can handle it.” –Coach Bob Ladoucer

A movie that reminds us that relationships are what count, that boys need role models to help them become men, and that it’s okay to enjoy victory as long as it doesn’t rule who you are, When the Game Stands Tall is a keeper.

Pick up your copy at your local Family Christian or order online (and don’t forget to check out other amazing deals while you’re there).

You can keep up with the latest news from Family Christian on your favorite social media outlet.

****Family Christian provided me with a free copy of this film in exchange for an honest and fair review.