At the beginning of August, my parents and I met in Colorado for a vacation. Despite living in southern Wyoming for seven years in the 80s and 90s, we’d never visited Estes Park, Colorado. One of my friends informed me that there was a hotel in Estes Park that inspired a rather famous book and movie. Written by Stephen King, The Shining is probably one of his most well-known horror stories. I had to smile when there was a brief mention of the hotel in Hiding Places by Erin Healy. Here’s a picture of Stephen King’s hotel (but not Erin Healy’s). 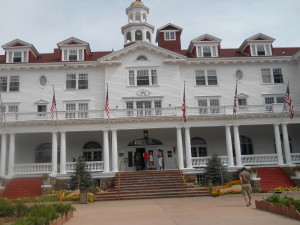 Eleven-year-old Kate Whidby dreams of becoming a spy. She already has plenty of practice keeping her family members’ secrets from the others. The day after she’s witnessed her grandfather arguing with his best friend, and sees a side of her father’s friend she didn’t know existed when he chases down a boy who stole something from him, the man is murdered.

At the same time in Denver, a robbery gone wrong, a consequent murder, and a gang member set on revenge for the death of his son bring several mysterious people to the Harrison Lodge, a place run by Kate’s family in a small Colorado town. In her desire to help others, Kate finds herself over her head when she chooses to harbor a fugitive while trying to save her family. 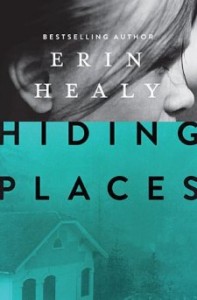 This book is about families of all shapes and sizes. From Kate’s family at the lodge—who tend to ignore her existence or attempt to make her life miserable—to the brotherhood evolved from committing crime in a gang, Healy explores the dynamics of what makes a family work, what makes them fight for each other.

Through a child’s eyes, readers sense the neglect. Through a young man’s perceptions, we feel the longing of a place to belong. And through the acts of a group of gang members, loyalty is not questioned, no matter the consequences.

****Thomas Nelson Publishing and BookLook Bloggers provided me with a copy of this book in exchange for an honest and fair review. All opinions expressed are my own.