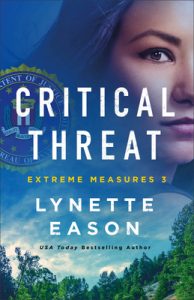 FBI Special Agent Grace Billingsley tracks serial killers, using her skills as a psychiatrist and behavioral analyst to get dangerous people off the street and safely behind bars. But prison psychiatrist Sam Monroe knows that just because a killer is incarcerated doesn’t mean they’re not a threat. His own father, Peter, is a serial killer–in prison but certainly not out of Sam’s life, as much as he wishes he was.

When bodies start showing up with Peter’s MO, Sam and Grace are both called in to consult. They’ve met before–and though Grace thought they’d made a real connection, Sam ghosted her. They’ll have to get past the awkwardness and mistrust to solve this case–especially because it’s about to get personal.

USA Today bestselling author Lynette Eason doesn’t give you time to catch your breath in this breakneck race to stop a serial killer.