As with Laura McNeill’s debut, Center of Gravity, I am sure there will be a slight uproar about her latest book, Sister Dear. While Thomas Nelson, a publisher most known for their Christian Fiction, continues to release books that aren’t quite what readers expect from them, there are sure to be some opponents. That said, I enjoy veering away from straight Christian fiction once in a while, and Sister Dear would definitely fit on the shelves of the ABA market alongside a book such as, say…Gone Girl (this mainly because of the character development. I didn’t like either character in that book and I didn’t like one of them in this one). 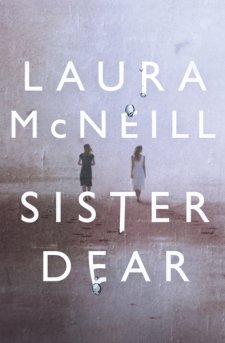 After ten years in prison, serving time for a crime she did not commit, Allie is released early. But life doesn’t go back to the way it was. Her parents are uncomfortable around her and her daughter, now fifteen, doesn’t want anything to do with her. In fact, the only person who seems to be on Allie’s side is her sister Emma. But Emma has secrets of her own and with Allie’s return and determination to find the true person responsible for the crime she paid for, all of these secrets and lies start to unravel.

An interesting concept for a book but in the end, I found it difficult because there was no redemption for Emma. Her jealousy and hatred made her into an unlikable character even though I felt McNeill tried to make the reader like her at first. It was almost as if her dark side was revealed a little too early. However, the story moved along quickly as I wanted to find out all of the details of the crime and whether or not Allie would be okay. Overall, an interesting read but not something I’d likely pick up in a bookstore to take home and read.

****Booklook Bloggers and Thomas Nelson publishing provided me with a complimentary copy of this book in exchange for an honest and fair review. All opinions expressed are my own.