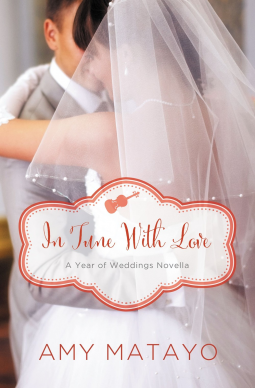 When April Quinn moved to Nashville to pursue a songwriting career, she never dreamed her reality would mean someone stole the lyrics she’d written on a napkin from the bar she worked at to pay her bills. Jack Vaughn’s days as a bartender come to an abrupt end one evening when he leaves the bar and stumbled across four written lines that became his first hit. Three years later—after becoming a bona fide musician with albums, tours, and adoring fans—Jack’s guilt is eating away at him, and he is ready to make amends in any way possible. So when April’s sister asks him to sing at her wedding, he agrees but apologizing to April turns out to be more difficult than he’d imagined. And he doesn’t relish the thought of going back on tour and not spending more time with her.

Through some cute and some hilariously awkward exchanges, both April and Jack begin to realize their misconceptions and errors. April has held on to her bitterness and expectation for an apology that has yet to come. Jack’s guilt has slowly grown to consume him. April had been his friend when they both worked at the bar even if he gave her a hard time about writing her lyrics everywhere—including his arm on at least one occasion. As April’s regret in agreeing to help her high maintenance sister with the wedding when the wedding coordinator quit grows daily as the wedding draws near, Jack comes up with a plan to help. But will it be too little too late?

I love that the bulk of this story takes place three years after the incident which escalates Jack’s career and causes April’s immense disdain toward him. Three years gives these main characters time to grow in maturity and mature in appearance. It was also fun to read a story set in my hometown—Nashville. While the places in the novella are fictions, there are plenty of real places I could insert into the story with no stretch of my imagination. Amy Matayo is a new-to-me author but someone I will definitely be looking into more and keeping an eye on in the future because this was a keeper in this year’s wedding novella collection.

****Zondervan provided me with a copy of this novella via Netgalley in exchange for an honest and fair review. All opinions expressed are my own.