END_OF_DOCUMENT_TOKEN_TO_BE_REPLACED

Targeted for Murder, the first book in Elizabeth Goddard’s Wilderness, Inc. series left me on the edge of my seat and biting my nails. Just when I thought I could take a breath, the action and suspense kicked right back in at full forces. No easing into anything in this story. 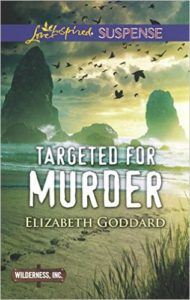 When Hadley Mason learns her father lied to her and her life is now in danger, she does the first thing that comes to her mind. She runs. While danger is on her heels, she comes across the path of Cooper Wilde, a wilderness expert in Oregon’s Rogue River Wilderness.

As Hadley and Cooper fight for their lives, they also fight to come to terms with the doubts that plague them. Can Hadley trust anyone again knowing her father, the person she trusted the most, lied to her? Will Cooper escape the grasp of the perceived mistakes of his past to embrace the possibility of a full and rewarding future? 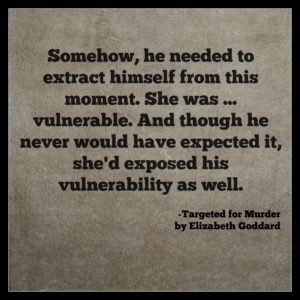 Goddard captures both the beauty and the danger of the Oregon Coast terrain beautifully. It’s been twenty-plus years since I’ve visited but I could see the cliffs, hear the ocean, and feel the danger as I embarked on this wild ride with Hadley and Cooper. Target for Murder is an exciting, enjoyable thrill ride full of twists and turns, and I’m already looking forward to the next book!!

The author provided me with a copy of this book. I was not required to write a positive review and all opinions expressed are my own.