Over the past several years, there has been a re-emerging interest in Sherlock Holmes (the Sherlock series starring Benedict Cumberbatch and Martin Freeman, the television show Elementary, and the Robert Downey, JR/Jude Law blockbusters following the adventures of said detective). I’m a little ashamed to admit I’ve not actually read any of Sir Arthur Conan Doyle’s detective adventures, though. I have to say that if they are as much fun as Rachel McMillian’s upcoming The Bachelor Girl’s Guide to Murder, I’ve been missing out!! 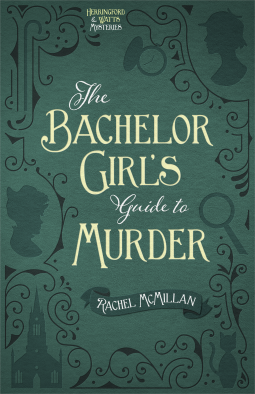 Best friends and flatmates Merinda Herringford and Jemima (Jem) Watts tromp around Toronto in 1910, often disguised in trousers and bowler hats, as they solve mysteries no one else seems interested in. The pair teams up with Ray Deluca, a reporter and Jasper Ford, a police constable, as they are investigating the murders of two Irish women.

Far beyond what society and the women-hating Morality squad dictate acceptable, the duo of Herringford and Watts search for answers amidst both the lower classes and upper classes of Toronto.

What an absolute enjoyable and fun read!! While The Bachelor’s Guide to Murder’s focus is primarily on Jem (the more proper of the sleuthing team) and Ray, readers will feel at home with the foursome. And while the cadence of the book is light-hearted (including some footnotes for those astute readers in most chapters), the story delves deeper than it may appear upon first settling into the book.

It’s a story about the hardships for immigrants in Toronto, about the role women were expected to play and how they were viewed when they step outside the box built around them, and about focusing not on oneself but on the many others around you and acknowledging that while life might be hard for you, others have it worse. And in the midst of everything, there’s the hope of falling in love.

After finishing this delightful debut in two days (it would have been less but I had to work), I look forward to more Herringford and Watts mysteries in the future. The first full-length book will be available April 1, but feel free to introduce yourself to these women in the e-novella A Singular and Whimsical Problem.

***Harvest House Publishers provided me with a complimentary copy of this book via NetGalley in exchange for an honest and fair review. All opinions expressed are my own.