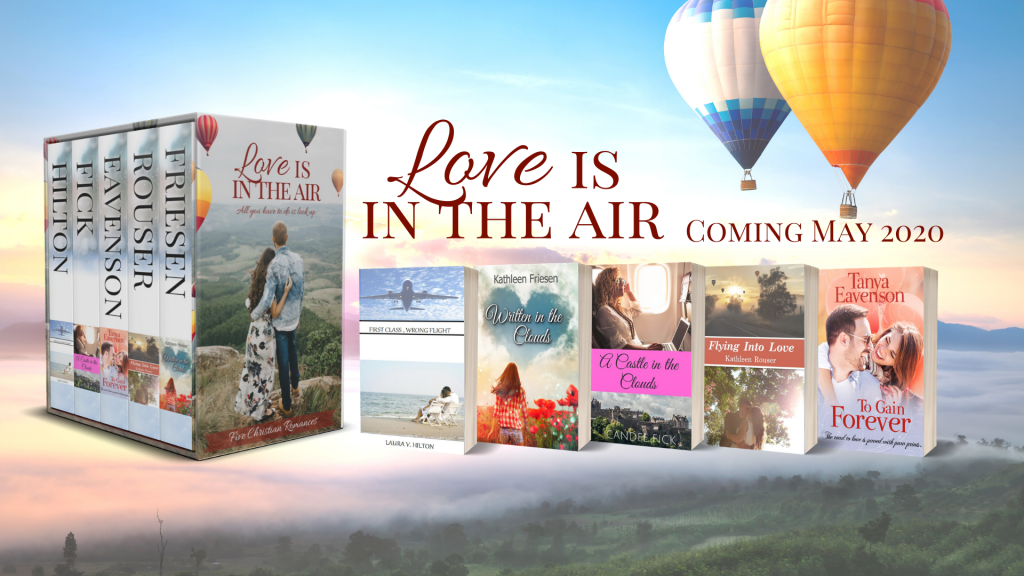 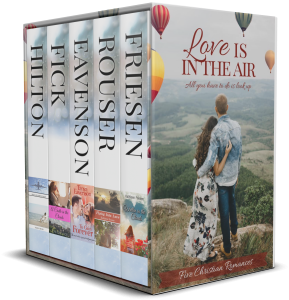 All you have to do is look up.

This collection of five brand new romances is sure to send your heart soaring. Journey from Canada to Georgia and Colorado to Paris by way of Michigan as these couples find love is in the air. All they had to do was look up.

Candi Walker is excited to attend her former college roommate’s wedding. At least it’s a direct flight across the country and the potential of messing up is next to impossible…until she crashes into a handsome pilot. Now it’s a dream-come-true or her worst nightmare.

Alex Kuklewski has one last flight before he attends his stepsister’s wedding. Desperate to escape his tagalong ex-girlfriend’s clutches, Alex prays that his future wife would drop into his path. And she does. Too bad he and Candi aren’t headed to the same destination.

Emotional baggage on both sides exceeds the weight limit, and the flight to happily-ever-after seems grounded. What will it take for them to launch true love into the air?

A Castle in the Clouds by Candee Fick:

Aspiring romance novelist Miranda Scott has her head in the clouds and her nose buried in a book. Raised by a single mother, extravagant trips to castles overseas are only a fairy-tale…until a co-worker’s accident has her boarding a plane to teach creative writing on an all-expenses-paid school-sponsored trip. Family responsibilities kept Joshua Clark close to home, but it’s finally time for the history teacher to spread his wings. Hopefully his time chaperoning an overseas trip and seeing history in person will reveal what the next chapter holds.

However, falling in love surrounded by teenagers was never the plan.

Flying Into Love by Kathleen Rouser:

Unable to say no when others need her, Talia Sampson took on her deceased aunt’s advice column and the care of her special needs niece. Then new veteran, Ben Tanner, shows up unexpected on her doorstep. Hurt many times, he wonders where home is. Talia isn’t happy finding a hot-air balloon with him, but she treasures the old journal with it. Ben hopes restoring her family’s antique will please her, until he discovers a secret that shatters his trust. And Talia hates flying. Will she trust God—and Ben—enough to go airborne?

To Gain Forever by Tanya Eavenson:

Karianne Bennett, small-town wedding coordinator, has always believed in happily-ever-afters. That is, for everyone but herself. Her fiancé’s alcohol-related death put an end to her own dreams and turned her career into a weekly reminder of all she’s lost. Hope comes when she adopts a retired service dog and a newcomer catches her eye.

Trey Scott has been fascinated with fireworks since he was a boy. If he can land the account for a hot-air balloon festival in an out-of-state town, he’ll be that much closer to achieving his lifelong goal. But his dreams never included a beautiful dog walker who also happens to be the stranger he’s been praying over for years.

Written in the Clouds by Kathleen Friesen:

A mysterious cloud formation, a nerve-wracking introduction for JR and Serena, an unexpected reunion for Jim and Blythe, a few traumatic memories, a pilot for the company plane, and another afraid of flying. Mix them together…and what in the world is God up to? Is it love at first flight?

About (one of) the Authors

Tanya Eavenson is an award-winning Christian romance novelist. She enjoys spending time with her husband and their three children. Her favorite pastime is grabbing a cup of coffee, eating chocolate, and reading a good book. You can find her at her website http://www.tanyaeavenson.com/