Happy Friday, friends! Last Saturday I was at my local ACFW (American Christian Fiction Writers) meeting and one of the other members said she’s working on developing her debut release from last year into a play. By the way, how cool is it that she wrote it with her dad?

Once you’ve read the first line (and there’s an extra bonus book trailer for you this week), leave a comment and share the first line of the book closest to you then hop on over to the Hoarding Books Blog and check out what everyone else is sharing this week. 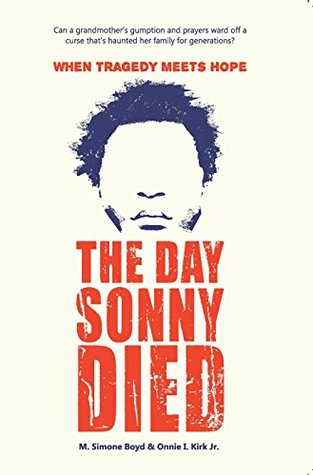 There was still blood on Sonny’s shoes when the detective came to interview him.

When three-year-old Sonny witnessed his father’s brutal murder, he didn’t know a curse haunting the men in his family was to blame. But his grandmother, Constance Jackson, did. For 20 years, Constance clung to her abusive marriage and church hoping that she could save her son. But hope and prayers were not enough, and her son died an unnatural death just like four generations of Jackson men before him. Now, she’s stuck raising her grandson – Sonny.

As time goes on, Constance sees Sonny as a chance to make things right with her past. But as Sonny approached manhood, Constance recognizes a change in him. And her gut says the shadow of the curse is lurking and will strike again soon.

She fights to keep Sonny from his father’s fate. But a grandmother’s gumption and prayers may not be enough to save Sonny’s soul.