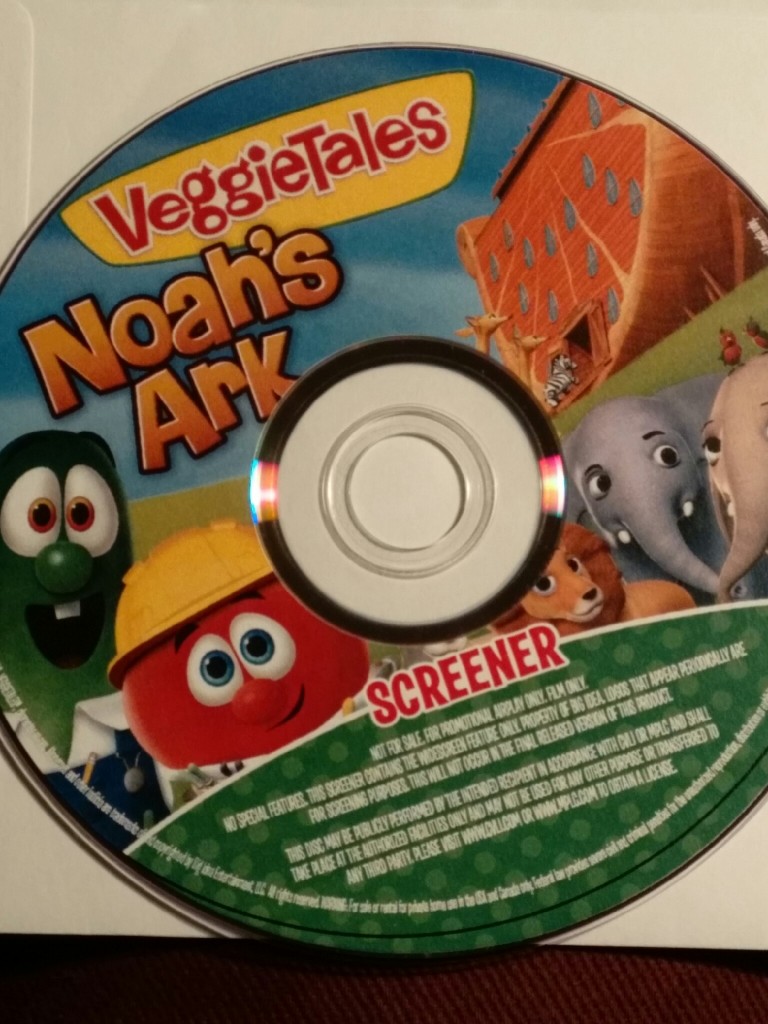 Family Christian provided me with a free screener copy of this DVD. All opinions expressed herein are my own.

I have a confession to make: I do not have kids. My nieces and nephew are not teenagers and live 3,000 miles away. But when I was offered an opportunity to review a screener copy of the upcoming Noah’s Ark DVD from Veggie Tales, I jumped on the opportunity. It’s been over twenty years since I was introduced to Larry the Cucumber, Bob the Tomato, and the imagination of Big Ideas Entertainment (and I was a college student at that time). Over the past two decades, there have been almost fifty DVDs released in the Veggie Tales series, each with a positive or uplifting message for little ones. Whether it be virtues, handling fear, or dealing with bullies, the creators of these short (one hour or less) DVDs are committed to entertain children while passing along Biblical messages.

As with the other Veggie Tales DVDs, Noah’s Ark is filled with catchy songs, a positive message, and plenty of laughs (“Grab a tool. It’s Hammer Time” and “I’ve never been so amused and so terrified at the same time”). The humor aspect in the Veggie Tales movies reminds me a lot of Pixar. While the creators are making movies to enrich kids lives, they are also putting things in there that will keep parents amused (well, maybe until they’ve had to watch it for the fiftieth time). Noah’s Ark also has a new look for the characters–after twenty years, it was time for an update. The movie deals with the area of trusting God. Shem comes home from his honeymoon to find a giant boat (it’s an ark) being built where his house is supposed to go. While his father, Noah, believes this is what God told him to do, Shem struggles with the fact he didn’t hear from God. He continues to struggle as he tries to find a way off the boat when the rain stops.

When the Noah movie starring Russell Crowe came out last year, it was disheartening to find so little of the storyline came from the Bible (I mean they didn’t even use any form of God’s name in the entire movie–he was referred to as the creator). There are a few instances in Noah’s Ark that seemed to poke fun at that. When a giant squid comes, Noah tells him to “Go home. You can come back for Job.” Through humor, vegetables, and a upbeat songs, the story of Noah is retold in a new and entertaining way. I am, however, left with one question. How does a pea and blueberry have sons who are an asparagus, a tomato, and a cucumber?

Noah’s Ark will be available from Family Christian on February 28 (which just happens to be an excellent day as it’s also my birthday).

Let’s celebrate with a $10.00 customer appreciation certificate from Family Christian. Enter to win.