Do you prefer stand alone novels or series? I read both but series are wonderful because you get to re-visit some fictional people and places. I also have no problem reading one book in a series and then waiting up to a year for the next book. My sister-in-law is one of those strange people who has to have every book in a series in her hands before she’ll read it, though. Which type of series reader are you?

And that brings me to this book I’m looking forward to come April! The second in The Sugar Baron’s Daughters series by Lisa T. Bergren. 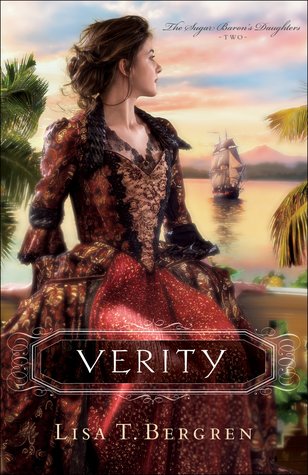 After leaving England behind for a new life in the West Indies with her sisters, Verity Banning wants something to call her own. Her affinity for animals inspires her to set up a business importing horses, as well as other goods in demand by the island residents. But when she arrives in the Colonies to purchase her goods, unexpected news of Captain Duncan McKintrick awaits her–as does the captain’s handsome brother, Ian–whose sympathies lie with the fledgling Patriot cause.

As the great-granddaughter of a British general and friend to many Loyalists, Verity believed all she wanted was a peaceful resolution. But both the Patriots and the impassioned Ian McKintrick are steadily laying claim to her heart. When faced with the decision of what–and for whom–she will fight, can she set her feet on a new path despite the danger that awaits?