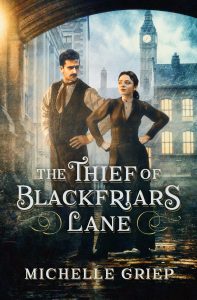 Constable Jackson Forge intends to make the world safer, or at least the streets of Victorian London. But that’s Kit Turner’s domain, a swindler who runs a crew that acquires money the old-fashioned way—conning the rich to give to the poor. When a local cab driver goes missing, Jackson is tasked with finding the man, and the only way to do that is by enlisting Kit’s help. If Jackson doesn’t find the cabby, he’ll be fired. If Kit doesn’t help Jackson, he’ll arrest her for thievery. Yet neither of them realize those are the least of their problems.