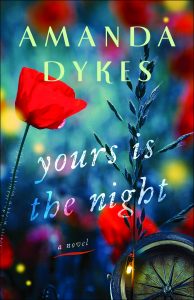 A mysterious song in the forest . . .
A discovery in war-torn France . . .
A journey toward hope.

The trenches of the Great War are a shadowed place. Though Platoon Sergeant Matthew Petticrew arrived there with a past long marked by shadow, the realities of battle bring new wounds–carving within him a longing for light, and a resolve to fight for it.
One night, Matthew and his comrades are enraptured by a sound so pure, a voice so ethereal, it offers reprieve–even if only for a moment. Soon, rumors sweep the trenches from others who have heard the lullaby too. “The Angel of Argonne,” they call the voice: a mysterious presence who leaves behind wreaths on unmarked graves.

Raised in the wild depths of the Forest of Argonne, Mireilles finds her reclusive world rocked when war crashes into her idyllic home, taking much from her. When Matthew and his two unlikely companions discover Mireilles, they must embark on a journey that will change each of them forever . . . and perhaps, at long last, spark light into the dark.

On the 100th anniversary of the dedication of the Tomb of the Unknown Soldier comes an emotive tale inspired by the courageous soldiers of World War I.

With two beautifully written and highly acclaimed books, Amanda Dykes has set a high standard for herself. And with Yours is the Night, she proves she is up to the challenge by not only meeting that standard but exceeding it.

First thing to note is this is not a dual time story like Dykes’ previous books. It is 100% set during World War I but that takes nothing away from the story. And what a story it is!!

Told through five points of view and based loosely on the Unknown Soldier, this book is like nothing I’ve read before. It is a story of war but more so it a story of human nature and fear and heartache and courage and sacrifice. It is emotional and raw and real.

In short, it is the best book I’ve read this year (and maybe since Dykes’ previous book). You do not want to miss this book but be sure to keep the tissues on hand.

And if you’re an audiobook fan, the narration on this one is amazing.