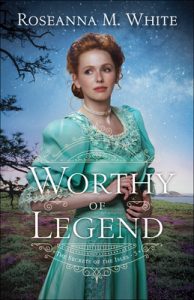 After a summer of successful pirate-treasure hunting, Lady Emily Scofield and her friends must hide the unprecedented discoveries they’ve made, thanks to the betrayal of her own family. Horrified by her brother, who will stop at nothing to prove himself to their greedy father, Emily is forced to take a stand against her family—even if it means being cut off entirely.

Bram Sinclair, Earl of Telford, is fascinated with tales of King Arthur and the Knights of the Round Table—an interest he’s kept mostly hidden for the last decade. But when a diary is unearthed on the islands that could lead to a secret artifact, Bram is the only one able to piece the legends together.

As Bram and Emily seek out the whereabouts of the hidden artifact, they must dodge her family and a team of archaeologists. In a race against time, it is up to them to decide what makes a hero worthy of legend. Is it fighting valiantly to claim the treasure … or sacrificing everything in the name of selfless love? 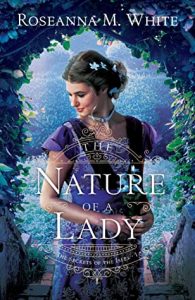 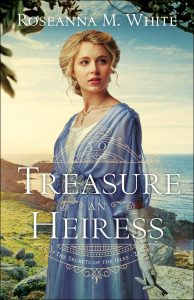 If you have not yet read the previous books in Roseanna M. White’s The Secrets of the Isles series, I strongly recommend you go back and do so before diving into Worthy of Legend. While the final book in the series can stand alone, all of the characters are interconnected and the history of the treasures this group of friends are in search of is a storyline that runs through all three books.

We’ve met Lady Emily previously, but her background and family revealed in this final book make her that much more likable. And Bram? Well, he’s a bit of a wildcard, but once he shows his protective side when it comes to Emily, he’s a big softy (and I loved him for it).

White includes a thread for Emily’s maid (Tommie) who has her own struggles she’s dealing with. Her devotion and friendship with Emily are things we need more of in this world.

Worthy of Legend is a wonderful mix of adventure, romance, tension, historical facts, and faith that kept me reading until the end.