If you hung around my blog long enough, you know that my love of all things Jane Austen makes me a fan of regency reads. And while I’ve wanted to read Carolyn Miller’s books since The Elusive Miss Ellison was released over a year ago, I have just not been able to fit it in my schedule. But  Winning Miss Winthrop starts a new series, so I finally had an excuse to read one of Miller’s books. And can I say, I was not at all disappointed.

Before I finished Carolyn Miller’s book and read the author’s note, I saw echoes of Jane Austen in Winning Miss Winthrop—especially Persuasion in the first three quarters and a little Pride & Prejudice in the final pages.

Yet Miller’s story is original and engaging (and maybe a little sad—at first). I couldn’t help but feel bath for Catherine as trial after trail invades her life. She is forced to leave the only home she’s known to live with her unhappy mother. The man she once loved is now the master of her family’s home and land.

The new master of Winthrop Manor has the burden of fixing the crumbling home, paying the outstanding debts of the previous Lord Winthrop, providing for a family that has had little to do with him in the past, and dealing with the machinations of a marriage-minded mother.

Jon’s mother was actually the character who surprised me the most. I never could exactly read Lady Harkness’s motives.

Readers of Miller’s previous series will enjoy the cameos from a few people but don’t worry, this book stands just fine on its own. And there’s no shortage of drama.

Miller’s portrayal of the aristocracy in Bath is filled with pictures of diversions such as concerts and balls as well as the assembly that are fresh and descriptively colorful. And though I wanted to yell at Catherine and Jon to just talk to each other already, it’s the journey they take that makes the ending worth the wait. 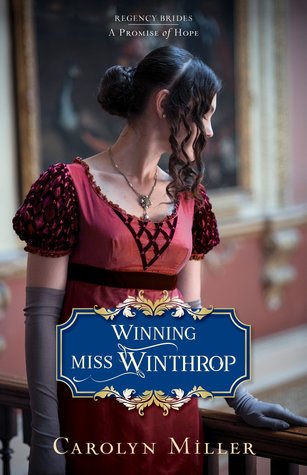 Catherine Winthrop has cried out to God too many times to count. Years ago, the man who stole her heart rejected her–and she’s never recovered. Now tragedy has brought him back into her life. This time it isn’t her heart he’s taking, it’s her home and her family’s good name–and she has no one to share her grief.

Jonathan Carlew’s life may look enviable from the outside–wealthy, handsome, landed–but the mystery surrounding his birth has shadowed his entire life. Now as he ascends to the barony, fresh challenges await, including a scheming mama who wants him to embrace power, even at the cost of losing love. How can he remain the kind, honorable man he strives to be and still meet the demands of his new society responsibilities?

These two broken hearts must decide whether their painful past and bitter present will be all they can share, or if forgiveness can provide a path to freedom for the future.