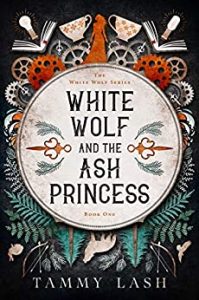 The princess was the guardian of the light of the black wolf and the grey. White boar greatly desired her light, though the boars had possession of their own. When the princess refused to give up the light, both were given to the fire to do with them as it wished.

Memory loss prohibits Izzy from remembering her life before age seven when she suffered a terrible trauma that left her with physical scars. Crippling panic keeps Izzy from wandering beyond the stables but Tubs, the Gudwyne’s young stable boy, encourages Izzy to go beyond the property’s rock wall into a world that promises possible answers but also great danger.

Gifted with claws of copper and teeth of iron, the black wolf and the grey call him “White Wolf”; for he is the greatest of them with the power of flame and ash.

While running to escape his past, Jonathan Gudwyne rescued Izzy and took her in, but who did she belong to before he became her guardian?

With the touch of the wolf’s great paw, the girl rose out of the ashes a woman—a mighty warrior armed with a copper axe.

A mysterious cellar filled with secrets sets Izzy on a path to the New World where the Wendigo wanders and Water Panther swims. In the wilds of seventeenth-century America, Izzy and Jonathan discover the legends of the New World aren’t the fairytales of their library home in England.

If you read the book description, you may think you’re picking up a fantasy read with White Wolf and the Ash Princess by Tammy Lash. That’s what I thought anyway. But this is actually a historical fiction book with some Native American legends mixed in there.

Izzy fears the outside world yet longs for freedom. She can’t remember much about her past and depends on Jonathan for a lot. Jonathan is a protector at heart, but he doesn’t always make the wisest decisions. As Izzy sets out on her journey of discovery, the read is swept along in the saga.

Lash’s vivid prose cements readers in each scene from England to the sea to America, and the characters (even the secondary ones) all have unique personalities you can’t help but feel a connection with (or as disconnect with when it comes to the villain). But what I enjoyed most about White Wolf and the Ash Princess were the twists and turns I never saw coming. I love when an author surprises me, and Lash managed it multiple times.