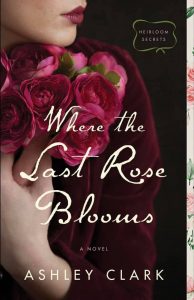 Alice runs a New Orleans flower shop alongside her aunt, but thoughts of her mother, who went missing during Hurricane Katrina, are never far from her mind. After getting off on the wrong foot with a man who comes to the shop, Alice soon realizes their worlds overlap–and the answers they both seek can be found in the same place.

In 1861 Charleston, Clara is an abolitionist, unbeknownst to her father, who is heavily involved with the Confederacy. She attempts to assist an enslaved woman reunite with her daughter, and a dashing Union spy is just the person to help them. But things go very wrong when Clara agrees to aid the Northern cause by ferrying information about her father’s associates–and her own fiancé.

Faced with the unknown, both women across the years will have to dig deep to let their courage bloom. 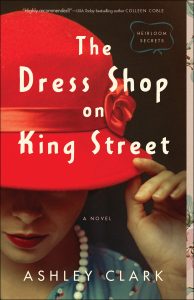 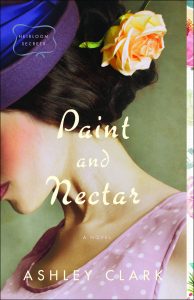 Where the Last Rose Blooms is the third and final book in Ashley Clark’s Heirloom Secret series. Like the previous two book, this one has a dual timeline with the modern-day and Civil War-era storylines connecting throughout.

The book really takes off once Alice and Clara’s stories connect. Both women have faced and are facing obstacles—some which are daunting and don’t seem to have away around, over or under. The language of flowers is used throughout the book, adding an interesting detail.

The ending of the book was a little underwhelming for me. Clara’s story didn’t really have one. It just tapered off and we’re left guessing/assuming what happens, and the entire ending was very rushed. But overall, this was an enjoyable ending to the series.