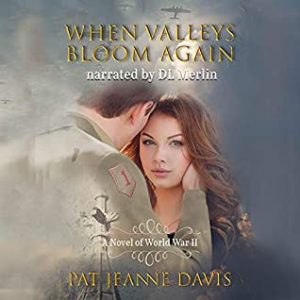 As war approaches in 1939, Abby Stapleton’s safety is under threat. Her father, a British diplomat, insists she go back to America until the danger passes. Abby vows to return to her home in London—but where is home? With her family facing mortal danger so far away and feeling herself isolated, she finds it hard to pray or read the Bible. Did she leave God behind in war-torn London too?

Abby becomes friendly with Jim, a gardener on her uncle’s estate. Jim can’t get Abby out of his mind. Did she have a sweetheart in England? Was it foolish to think she’d consider him? He curses his poverty, and the disgrace of his father’s desertion and drunkenness haunts him. Can he learn to believe in love for a lifetime and to hope for a happy marriage?

Abby couldn’t know the war would last a long time, nor that she would fall in love with Jim—soon to be drafted by the US Army—or that she’d have to confront Henri, a rejected suitor, determined by his lies to ruin her reputation and destroy her faith in God’s providence. Will she discover the true meaning of home and find happiness with Jim?

With so many historical books set during and around World War II, it’s hard to stand out. In When Valleys Bloom Again, Pat Jeanne Davis introduces readers to Abby. As she shelters in America while her family endures the lengthening war, she has challenges of her own.

It took me a little while to really get into this story (it’s not until Henri enters the picture that things really start happening). Abby is young and naïve when we first meet her, but she does grow throughout the story, and despite the formulaic nature of the book, I did want to finish it to get to Jim and Abby’s happily ever after (although, I believe this is book one in a series, so maybe it’s more of a happy for now ending).

I listen to a lot of audiobooks, and while DL Merlin’s narration was a bit less polished than many of the books I’ve read, I felt it was a good fit for Abby’s character.