With fates bound by a shared tragedy, a reformed gambler from the Colorado Territory and a Southern Belle bent on breaking free from society’s expectations must work together to achieve their dreams—provided that the truth doesn’t tear them apart first.

Sylas Rutledge, the new owner of the Northeast Line Railroad, invests everything he has into this venture, partly for the sake of the challenge. But mostly to clear his father’s name. One man holds the key to Sy’s success—General William Giles Harding of Nashville’s Belle Meade Plantation. But Harding is champagne and thoroughbreds, and Sy Rutledge is beer and bullocks. Sy needs someone to help him maneuver his way through Nashville’s society, and when he meets Alexandra Jamison, he quickly decides he’s found his tutor. Only, he soon discovers that the very train accident his father is blamed for causing is what killed Alexandra Jamison’s fiancee—and what has broken her heart.

Spurning an arranged marriage by her father, Alexandra instead pursues her passion for teaching at Fisk University, the first freedmen’s university in the United States. But family—and Nashville society—do not approve, and she soon finds herself cast out from both. Through connections with the Harding family, Alexandra and Sy become unlikely allies. And despite her first impressions, Alexandra gradually finds herself coming to respect, and even care for this man. But how can she, when her heart is still spoken for? And when Sy’s roguish qualities and adventuresome spirit smack more of recklessness than responsibility and honor?

Sylas Rutledge will risk everything to win over the woman he loves. What he doesn’t count on is having to wager her heart to do it.

Set against the real history of Nashville’s Belle Meade Plantation and the original Fisk University Jubilee Singers ensemble, To Wager Her Heart is a stirring love story about seeking justice and restoring honor at a time in history when both were tenuous and hard-won.

One of the things I love most about Tamera Alexander’s books is the rich Nashville history she weaves into them. In the final installment of the Belle Meade Plantation series, she delves even deeper.

At its core, this book is about courage. About letting go of fears and giving God the opportunity to bless and amaze lives. Alexandra Jamison takes her first step of faith, one at a great cost and sacrifice, when she applies to teach at Fisk University. A school started for post-Civil War freedmen. She again faces a fear when she’s given the opportunity to travel with the Jubilee Singers as the person to arrange their travel and lodging as well as handle press releases. 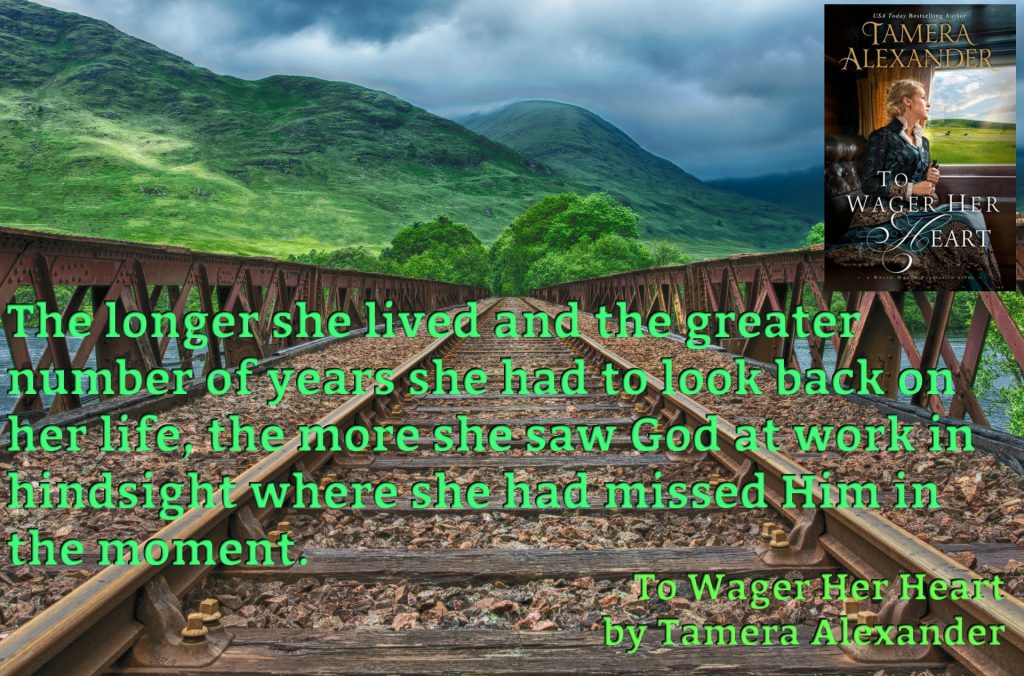 Through her deal with Sylas Rutledge, a railroad owner set on negotiating and nagging a bid for extending the line to the famed Belle Meade plantation, Alexandra must also gain the courage to forgive. As she and Sylas grow from lessons to friendship to the possibility of more, Alexandra (and Sylas) must come to terms with the fact that Sylas’s stepfather was implicated as the cause of the train wreck that caused the death of Alexandra’s fiancé.

Through heartrending scenes, Tamera Alexander gives readers just a glimpse into the life of the freedmen after the Civil War. The trials and prejudices they faced not only in the south but also in places of the Union. To Wager Her Heart also includes some history of hymn-writer Phillip Bliss and two train tragedies.

Both captivating and beautiful, this book with its faithful heroine and a hero who isn’t afraid to go after what he wants, is a fitting conclusion to the Belle Meade Plantation series. Step into the past and stay a while with To Wager Her Heart.

**Note, this book is part of a series but can be read as a standalone.