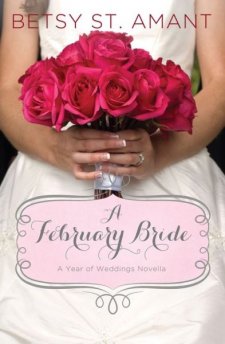 As a single gal, February fourteenth just means that there will be a wait at most local restaurants and several of my co-workers will receive flowers from their significant others. But as a girl, I am a sucker for a good love story and the third installment in the “A Year of Weddings” novella series does not disappoint.

Fearing a future relationship which mirrors those of the other women in her family, Allie Andrews ran out on her groom on their wedding day. Four months later her best friend, and ex-fiancé’s sister, asks her to be the maid of honor at her Valentine’s Day wedding. Marcus Hall has never understood why Allie bolted before their wedding. The only thing that makes sense to him is that she didn’t love him. And now they were going to be thrown back together for the next several weeks in preparation for his sister’s wedding. Can his heart handle seeing Allie again? Will she open up to him and tell him the truth of why she ran away?

Both characters in A February Bride by Betsy St. Amant are extremely likable. They both are unsure of where the other stands and are very human with their own issues. Because there is already a history between the two, their romance doesn’t seem forced or rushed as is the problem with many of the shorter stories.

I’ve not ready anything by St. Amant before but after reading A February Bride, I’ll be adding some of her work to my list of books I’d like to read. This novella series is a great way to introduce new authors to readers. I look forward to the other nine installments in this series.

***BookLook bloggers provided me with a free eBook in exchange for an honest and fair review. I was not compensated in any way for either a negative or a positive review of this book.