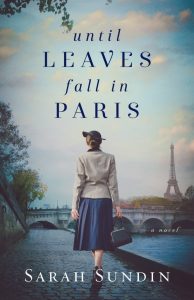 As the Nazis march toward Paris in 1940, American ballerina Lucie Girard buys her favorite English-language bookstore to allow the Jewish owners to escape. Lucie struggles to run Green Leaf Books due to oppressive German laws and harsh conditions, but she finds a way to aid the resistance by passing secret messages between the pages of her books.

Widower Paul Aubrey wants nothing more than to return to the States with his little girl, but the US Army convinces him to keep his factory running and obtain military information from his German customers. As the war rages on, Paul offers his own resistance by sabotaging his product and hiding British airmen in his factory. After they meet in the bookstore, Paul and Lucie are drawn to each other, but she rejects him when she discovers he sells to the Germans. And for Paul to win her trust would mean betraying his mission.

Master of WWII-era fiction Sarah Sundin invites you onto the streets of occupied Paris to discover whether love or duty will prevail.

How does one author continuously deliver such powerful, emotional, and engaging historical books with every new release? I don’t have the answer to that, but Sarah Sundin might, because Until Leaves Fall in Paris is a World War II era book I could not put down.

Character-driven novels are my favorite, and Sundin gives us three in her newest release. Lucy, the American-ballerina-turned-bookstore owner. Paul, the American automobile mogul working in France. And Josie, sweet, innocent Josie, who will steal your heart from the first time you meet her.

You’ll visit tumultuous Paris where division between the Germans and the Parisians is starting to widen. Walk down the streets where Jewish business have closes. Stand in the breadlines with Josie awaiting a morsel.

Sundin then adds more risk as both Lucy and Paul do their part to subvert the German party residing in their home city.

My only disappointment in this book is that I can’t read it again for the first time.