In Unraveling, book two in Sara Ella’s Unblemished trilogy, all is not well. Despite the defeat of the evil Jasyn Crowe, something is happening to the callings of those who follow the Verity.

As El wrestles with the question of whether she is worthy of being the verity’s vessel, her people are starting to wonder the same. Was there a mistake made?

The love triangle between El, Joshua, and Ky grows more complicated and twisted as this book continues. As one man’s love for El fights the Void within him, the other’s gives it roots. Will El listen to her heart or her history? 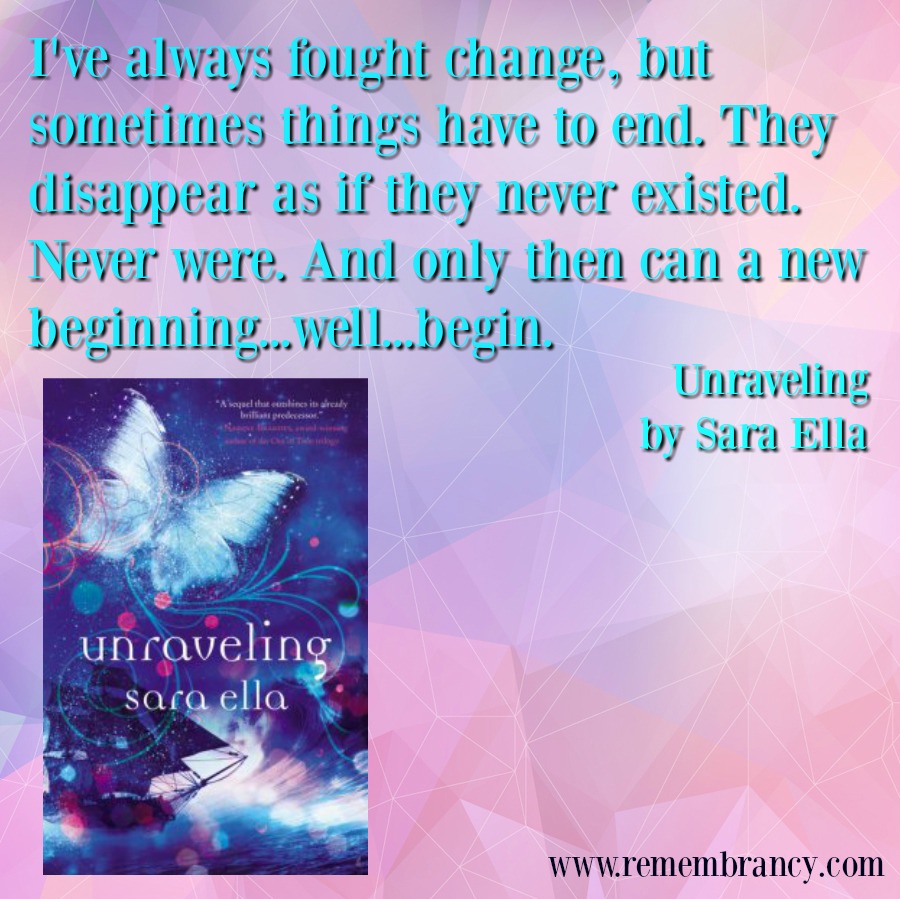 I had a hard time getting into this story. The love triangle angle comes on too strong for the first half of the book even though Ky’s input was only included as an aside. It wasn’t until El journeys out of the Second Reflection to the Third and then on to the Fourth that my interest was captured.

Another issue I had with the book was with the characterization of one particular person. How can someone I rooted for in the first book become someone I don’t like at all in the second? Don’t worry, when you read it, you’ll know exactly who I’m talking about.

Ella’s world-building is impressive as readers are taken to not one but two new Reflections. The Fourth is rooted in myth (which added a unique twist), and there’s only been a glimpse of fifth thus far. And the new relationships El develops with her sisters is heartening.

Unraveling definitely leaves readers with more of a cliffhanger ending than the first. It’s been a year since I read Unblemished and perhaps that has a little to do with why it took me so long to become engaged in the story. I’m optimistic that book three brings readers full-circle and gives us answers to the questions posed thus far as well as happy endings for everyone who deserves them. I do recommend reading this one so we’re not all totally lost when book three comes out.

Oh, and after reading the book, this gorgeous cover becomes even more so with context!!

What happens when happily ever after starts to unravel?

Eliyana Ember doesn’t believe in true love. Not anymore. After defeating her grandfather and saving the Second Reflection, El only trusts what’s right in front of her. The tangible. The real. Not some unexplained Kiss of Infinity she once shared with the ghost of a boy she’s trying to forget. She has more important things to worry about—like becoming queen of the Second Reflection, a role she is so not prepared to fill.

Now that the Verity is intertwined with her soul and Joshua’s finally by her side, El is ready to learn more about her mysterious birth land, the land she now rules. So why does she feel like something—or someone—is missing?

When the thresholds begin to drain and the Callings, those powerful magical gifts, begin to fail, El wonders if her link to Ky Rhyen may have something to do with it. For light and darkness cannot coexist. She needs answers before the Callings disappear altogether. Can El find a way to sever her connection to Ky and save the Reflections—and keep herself from falling for him in the process?