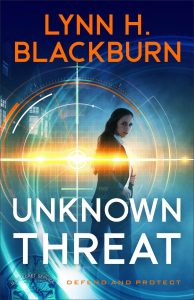 US Secret Service Special Agent Luke Powell is lucky to be alive. Three of his fellow agents have died in unusual circumstances in the past ten weeks. Luke is devastated by the loss of his friends and colleagues, and his inability to locate the killer feels like a personal failure. He’s an expert at shielding others, but now the protectors are in need of protection.

FBI Special Agent Faith Malone is driven to succeed and confident in her ability to solve every case she’s assigned. She’s been put in charge of the investigation into the unprecedented attacks, and with Luke’s life in danger, the stakes have never been higher. But it’s hard to know how to fight back when you don’t know who the enemy is.

As more agents are targeted, Luke and Faith will have to work together to bring a killer to justice and prevent any more names from joining their fallen brothers and sisters on the Secret Service Wall of Honor.

Lynn H. Blackburn starts a new series with a bang (literally). And the intensity just ramps up from there.

First, let me say while you do not have to read any of the Dive Team Investigations series in order to delve right into Unknown Threat, your enjoyment will be much greater if you do read those books first.

Ok, now let’s get to it. The suspense in this new book is, to say the least, intense, but even better, it’s plausible. The characters are great. Faith and Luke have a good rapport with some great banter but even the other team members and leaders and Faith’s sister add so much to round out this story.

With well-researched details about the secret service and FBI, Blackburn brings you along for a white-knuckle rollercoaster ride until the crime is solved and the uncertainty is erased between Faith and Luke. I can’t wait to read what Blackburn has coming next.