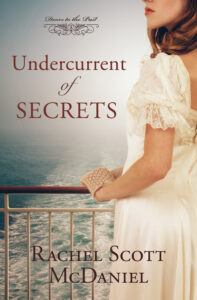 Two women, a century apart, are bound by a haunting secret aboard a legendary steamboat.

Walk through Doors to the Past via a new series of historical stories of romance and adventure.

As wedding coordinator for the 100-year-old steamboat The Belle of Louisville, Devyn Asbury takes pride in seeing others’ dreams come true, even though her engagement had sunk like a diamond ring to the bottom of the Ohio River. When the Belle becomes a finalist in the Timeless Wedding Venue contest, Devyn endeavors to secure the prestigious title with hopes to reclaim some of her professional dreams. What she hadn’t planned on was Chase Jones showing up with a mysterious photo from the 1920s.

A century earlier, Hattie Louis is as untamable as the rivers that raised her. As the adopted daughter of a steamboat captain, her duties range from the entertainment to cook. When strange incidents occur aboard the boat, Hattie’s determined to discover the truth. Even if that means getting under First Mate Jack Marshall’s handsome skin.

In Undercurrent of Secrets, Rachel Scott McDaniel tackles the dual time genre with precision as she carries readers through current day and the 1920s with a mystery that kept me on my toes and double the swoony romance.

In modern day, Devyn and Chase work together to solve the mystery of a photo while planning for a once-in-a-lifetime event aboard the Belle. In the past, Hattie and Jack find each other in the midst of the activity of the same boat which carries cargo along the Ohio River.

McDaniel intersperses the chapters of the book in such a way that a discovery in the present seamlessly leads to more details of that discovery in the past. It made me need to turn the pages. Add in a few twists along the way, and this is one book you will devour from start to finish and then want to pick up again to see what you missed the first time around. 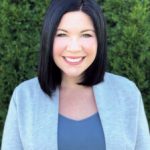 Rachel Scott McDaniel is an award-winning author of historical romance. Winner of the ACFW Genesis Award and the RWA Touched By Love award, Rachel infuses faith and heart into each story. Rachel can be found online at www.RachelScottMcDaniel.com and on all social media platforms. Her work is represented by Julie Gwinn of the Seymour Agency. Rachel resides in Ohio with her husband and two children.

A Century on the River

In 1914, America hadn’t joined WWI yet. Airplanes, or flying machines as they were called, were still a phenomenon. Radios weren’t a thing. Hawaii and Alaska weren’t part of the United States. The world as a whole looked different than the one we walk today. But one thing remains true as it had 100 years ago—The Belle of Louisville graced the waters. In fact, the century-old steamboat is like a floating time capsule. 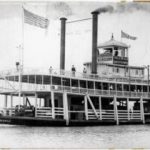 First named the Idlewild, this boat was built in Pittsburgh, PA and was launched in October 1914. It began its days as a packet boat, hauling freight and ferrying passengers. During the ‘Roaring 20s’ there wasn’t much documentation for her travels. But it’s believed the Idlewild spent the decade tramping—a steamboat term for going up and down the river, stopping at various towns and taking passengers for excursions. Which worked perfectly for Undercurrent of Secrets.

The boat was then sold to New Orleans where it continued to ferry passengers. In 1931, The Idlewild spent a season in Louisville running trips to Rose Island and Fontaine Ferry amusement parks. It then spent the next several years coursing the waterways from Canada to New Orleans, living upon the Mississippi and Ohio river systems until WWII. The second world war brought a lot of action to the Idlewild which was then outfitted with special equipment to push oil barges along the river. She also served as a floating USO nightclub for troops stationed at military bases along the Mississippi River.

In 1947, she was sold and renamed the Avalon. For the next two decades the legendary lady spent her days along the rivers, hosting excursions, bringing adventure to the hearts of many Americans. But all those years and miles eventually caught up to her and she fell in disrepair. In 1962, she was put up for auction in Cincinnati where she was purchased by Jefferson County Judge Executive Marlow Cook for $34,000. She then received her third name, The Belle of Louisville. 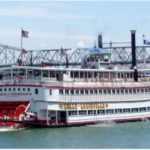 The restoration of the boat was supervised by marine architect Alan L. Bates (later Captain Bates). Capt. Bates’ books, Str. Belle of Louisville, and Moonlight at 8:30, were a huge help to me while researching the history of the boat and the crews who worked on her. The reno crew worked tirelessly rebuilding the Belle and on April 30th, she tested the waters again by racing against the Delta Queen in the first Great Steamboat Race. The Belle has been wharfed in Louisville ever since. This century-old steamboat has stood the test of time, surviving decades, sinkings, storms, weathering all the trials with grit and grace. If you ever find yourself in Louisville, you could book a cruise on the Belle and experience history. 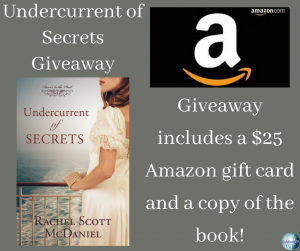 To celebrate her tour, Rachel is giving away the grand prize package of a $25 Amazon gift card and a copy of the book!!

Read more reviews and some author interviews via the Tour Landing Page.