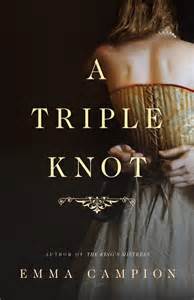 A little warning before I give you some information about this book. I am not a fan of the history of the English Royalty. I’ve never followed what king and/or queen did what and since they all went by a handful of names, I have difficulty telling them apart. That said, A Triple Knot was a little confusing at first but the storyline was interesting.

Joan of Kent, cousin to King Edward III, is immersed in the king’s court. She longs for the days before her father was murdered by her own grandmother. When the king arranges a political marriage for support in his campaign to regain the French crown, Joan fights the arrangement. At the age of thirteen, she secretly pledges herself to Thomas Holland, one of the king’s knights. At the beginning of the Hundred Years’ War, Thomas is continuously taken from the country. He comes home to find Joan has married another man and begins a campaign to annul that marriage. In the mean time, Ned (son of Edward III and Joan’s cousin first removed) continues to show his interest in Joan as well.

While reading this book, I had to look up information on several members of the royal family. It was somewhat interesting to learn about the lives of the royal family. You sensed Joan’s unease at being under their thumb and her lack of individuality. I felt for Joan most of the time but there were a couple of times I would rather have throttled her. She made some poor decisions (in the fictionalized version of her life). I did feel like the story ended too soon because this book only focused on Joan and Thomas’s marriage and not on Edward and Joan’s marriage.

***Blogging for Books provided me with a free e-copy of this book in exchange for an honest and fair review. I was not compensated for this review.