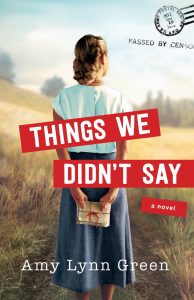 Headstrong Johanna Berglund, a linguistics student at the University of Minnesota, has very definite plans for her future . . . plans that do not include returning to her hometown and the secrets and heartaches she left behind there. But the US Army wants her to work as a translator at a nearby camp for German POWs.

Johanna arrives to find the once-sleepy town exploding with hostility. Most patriotic citizens want nothing to do with German soldiers laboring in their fields, and they’re not afraid to criticize those who work at the camp as well. When Johanna describes the trouble to her friend Peter Ito, a language instructor at a school for military intelligence officers, he encourages her to give the town that rejected her a second chance.

As Johanna interacts with the men of the camp and censors their letters home, she begins to see the prisoners in a more sympathetic light. But advocating for better treatment makes her enemies in the community, especially when charismatic German spokesman Stefan Werner begins to show interest in Johanna and her work. The longer Johanna wages her home-front battle, the more the lines between compassion and treason become blurred–and it’s no longer clear whom she can trust.

There is no shortage of World War II novels out there for readers and sometimes, it’s hard to find a fresh perspective on this well-documented war. A few authors have succeeded, and now you can add Amy Lynn Green to that list. I have not before read a story that takes place during this time period with this setting and told in this way.

Yes, this takes place during WWII, but most of the story is set at a German POW camp in Minnesota. Green takes readers on one woman’s journey through the letters she writes and those she receives (yep, it’s epistolary). Even Johanna Berglund stands out as a unique heroine.

She may be intelligent and abrupt, often rubbing people the wrong way, but she’s got a good heart, shown in the way she treats the prisoners she now censors letters for. Despite her headstrong tendencies, I adored Jo throughout this book, especially as she and Peter begin to share some of the more personal areas of their lives in their letters.

Whether you’re a fan of WWII fiction or even if you’ve been burned out it, Things We Didn’t Say introduces a fresh and engaging piece of US history.