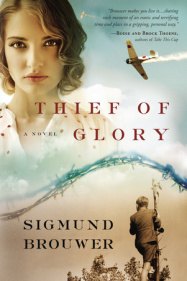 Ten-year-old Jeremiah Prins has not idea the turn his life will take the morning another boy challenges him to a fight over a girl. In the Dutch East Indies in 1942,the Prins family leads a privileged life until the Japanese invade the Southeast Pacific. Jeremiah’s father urges him to take care of his mother and younger siblings before he and Jeremiah’s half brothers are taken to work on the railroad. A few weeks later the Japanese return to their home and Jeremiah and his remaining family are loaded into a truck and taken to a Japanese concentration camp. Jeremiah is forced to rely on his cunning and courage to keep his family–and later, his one true love–safe and alive.

While I am well aware of the Jewish concentration camps set up by Hitler, I was unaware of the Jewish interment camps set up to hold the Dutch women and children. Through the eyes of a ten-year-old boy, Sigmund Brouwer paints a vivid picture of the day to day life in these camps and transports the readers to the time and place. I worried for Jeremiah and cried with him throughout this book. It’s a reminder to be thankful for the life I have been given–a life with little pain and trials. Read this one with a tissue, folks. But do read it.

***Blogging for Books provided me with a free copy of this book in exchange for an honest and fair review. I was not compensated in any way for either a positive or a negative review.