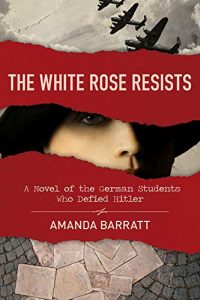 The ideal of a new Germany swept up Sophie Scholl in a maelstrom of patriotic fervor–that is, until she realized the truth behind Hitler’s machinations for the fatherland. Now she and other students in Munich, the cradle of the Nazi government, have banded together to form a group to fight for the truth: the White Rose. Risking everything to print and distribute leaflets calling for Germans to rise up against the evil permeating their country, the White Rose treads a knife’s edge of discovery by the Gestapo.

Annalise Brandt came to the University of Munich to study art, not get involved with conspiracy. The daughter of an SS officer, she’s been brought up to believe in the Führer’s divinely appointed leadership. But the more she comes to know Sophie and her friends, the more she questions the Nazi propaganda.

Soon Annalise joins their double life–students by day, resisters by night. And as the stakes increase, they’re all forced to confront the deadly consequences meted out to any who dare to oppose the Reich.

A gripping testament to courage, The White Rose Resists illuminates the sacrifice and conviction of an unlikely group of revolutionaries who refused to remain silent-no matter the cost.

There are some books that move you and challenge you, leaving an indelible impression. The White Rose Resists is one of them.

I’d never heard of the White Rose Resistance until this book. After reading it, I will not forget about these young people who dared to stand up for their beliefs in the midst of tyranny. 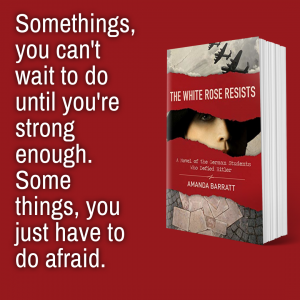 With a fictional story steeped in research and historical facts, Amanda Barratt pulls readers into the horrors of World War II Germany, the sacrifice made by a handful of young people to take a stand and now waver no matter the cost, and the thread of hope that one day, the war would end. 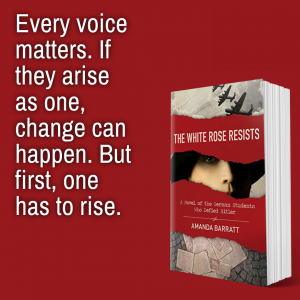 The White Rose Resists is an emotional story of courage and honor of love and sacrifice. It is a story I will not soon forget. And it a story everyone should read.