Chick Lit has become less rare than a decade ago, but it’s still around. It’s been a few years since Kristen Billerbeck gave us her brand of chick lit, so learning she had a new book coming out, just in time for summer vacations, had me excited.

The concept of The Theory of Happily Ever After is interesting. A scientist who wrote a best-selling book about happiness based on research who is anything but happy dragged on a cruise by her two best friends? What could go wrong?

Well, it turns out plenty can go wrong, including a lot of drama. I mean, Maggie has some just plain bad luck on the ship. But she’s got her best friends with her and the attention of two good-looking men.
There were a few laugh aloud moments but I saw the potential for a few more than were missed. The biggest missed opportunity in this book was the development of some of the supporting characters. One of

Maggie’s friend’s starts acting like a middle school mean girl while the other bosses them around. In fact, more often than not, Maggie’s friends come across bossier than concerned or supportive.
And then there’s the whole issue with the rehashing of about five topics continuously throughout the stories. I mean, I get it, Maggie likes Hallmark movies (for the same reason most of us like Hallmark movies, by the way).

While there were some aspects of this book that could have been better examined by leaving out a mention or two (or ten) of aforesaid Hallmark movies, there is a strong theme of finding what brings you happiness, of not letting others decide what you want in life, and of grieving loss instead of burying it.

Overall, The Theory of Happily Ever After had some high points and some low points for me which equals an average read. It also left a few unanswered questions about Maggie’s friends which makes me wonder if we’ll be seeing them again in future books. 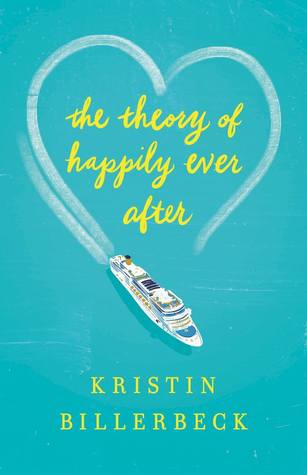 According to Dr. Maggie Maguire, happiness is serious science, as serious as Maggie takes herself. But science can’t always account for life’s anomalies–for instance, why her fiancé dumped her for a silk-scarf acrobat and how the breakup sent Maggie spiraling into an extended ice cream-fueled chick flick binge.

Concerned that she might never pull herself out of this nosedive, Maggie’s friends book her as a speaker on a “New Year, New You” cruise in the Gulf of Mexico. Maggie wonders if she’s qualified to teach others about happiness when she can’t muster up any for herself. But when a handsome stranger on board insists that smart women can’t ever be happy, Maggie sets out to prove him wrong. Along the way she may discover that happiness has far less to do with the head than with the heart.

Filled with memorable characters, snappy dialogue, and touching romance, Kristin Billerbeck’s The Theory of Happily Ever After shows that the search for happiness may be futile–because sometimes happiness is already out there searching for you.