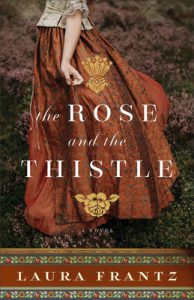 In 1715, Lady Blythe Hedley’s father is declared an enemy of the British crown because of his Jacobite sympathies, forcing her to flee her home in northern England. Secreted to the tower of Wedderburn Castle in Scotland, Lady Blythe awaits who will ultimately be crowned king. But in a house with seven sons and numerous servants, her presence soon becomes known.

No sooner has Everard Hume lost his father, Lord Wedderburn, than Lady Hedley arrives with the clothes on her back and her mistress in tow. He has his own problems–a volatile brother with dangerous political leanings, an estate to manage, and a very young brother in need of comfort and direction in the wake of losing his father. It would be best for everyone if he could send this misfit heiress on her way as soon as possible.

Drawn into a whirlwind of intrigue, shifting alliances, and ambitions, Lady Blythe must be careful whom she trusts. Her fortune, her future, and her very life are at stake. Those who appear to be adversaries may turn out to be allies–and those who pretend friendship may be enemies.

Laura Frantz returns with a Scottish hero you’ll swoon over, a volatile political environment, and a romance to cheer for in The Rose and the Thistle.

I’ll admit I had a tough time getting started with this one. While Frantz’s descriptions and detail put you right into 1700s Scotland, I’m a reader who sometimes is just ready for the story to move forward. But once Blythe and Everard finally meet, I was invested in their story. And things really got moving around the ¾ mark of the book.

There were some predictable moments in the book, but I found myself anticipating them rather than rolling my eyes at them. Overall, another enjoyable read to get swept away in from this author.