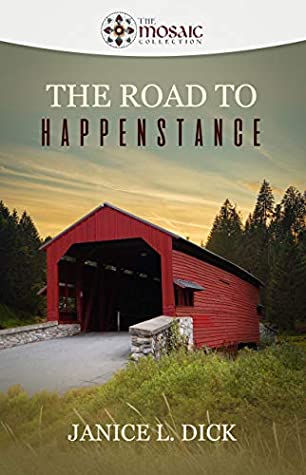 One man running from his past, two women he’s attracted to, and a peculiar town that won’t let him go.
Matthew Sadler rides his ’77 Harley into Happenstance, intent on passing through, but people and events conspire to prevent his leaving.

The elderly Barlow sisters consider Matt their knight on a motorcycle. Matt is entranced by Roni, the other lodger at the Happenstance Hotel who bears an uncanny resemblance to Matt’s beloved, deceased wife. The young doctor in town, Paula Percy, adores Matt’s motorcycle. However, she is suspicious of the woman from the hotel.

As the days pass, the quaint little town, with its unique residents, begins to show its sinister side. When evidence of multiple thefts leads to Matt’s door, he must deal with a mystery and yet more false accusations.

Do the old diaries of Amanda Rutherford Barlow hold the answers Matt so desperately seeks? Will Happenstance finally let him go, or does he have a reason to stay?

Happenstance is a quaint with an abundance of quirky characters who both welcome newcomers and immediately invite them in. Despite his best intentions to leave, the residents pull Matt Sadler into their little world.

While readers are given inklings that all is not right throughout the book, the actual mystery doesn’t reveal itself until three-quarters of the way through the story (but things really start moving once it does). It annoyed me a little how gullible Matt was when it came to Roni, especially because I would think the past he is running from would make him skeptical. In fact, I wondered if he’d never heard the “fool me once, same on you; fool me twice, shame on me” adage because he was fooled way more than twice.

Most of the townspeople are what make The Road to Happenstance enjoyable and, even though there were a couple of things in this plot I didn’t love, I would return to this little fictional town to find out what’s happening with everyone.