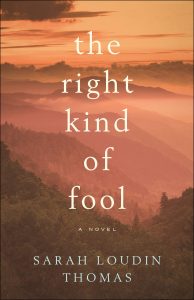 Thirteen-year-old Loyal Raines is supposed to stay close to home on a hot summer day in 1934. When he slips away for a quick swim in the river and finds a dead body, he wishes he’d obeyed his mother. The ripples caused by his discovery will impact the town of Beverly, West Virginia, in ways no one could have imagined.

The first person those ripples disturb is Loyal’s absentee father. When Creed Raines realized his infant son was deaf, he headed for the hills, returning only to help meet his family’s basic needs. But when Loyal, now a young teen, stumbles upon a murder it’s his father he runs to tell–shaping the words with his hands. As Creed is pulled into the investigation he discovers that what sets his son apart isn’t his inability to hear but rather his courage. Longing to reclaim the life he abandoned, Creed will have to do more than help solve a murder if he wants to win his family’s hearts again.

Sarah Loudin Thomas writes a book with a cadence of family, love, and so much more. The Right Kind of Fool begins with a murder and 13-year-old Loyal’s witnessing of curious actions by a couple locals.

While the shooting (inspired by a historical one) is a singular thread of this story, it goes so much deeper than that. Thomas puts the reader into each member of the Raines family’s head. She beautifully gives us an understanding of the challenges of a deaf boy in the 1930s as well as the guilt and shame of a father who feels he’s failed his son and wife. Delphy rounds out the small, broken family.

The characters and the setting burrow their way into the reader’s heart. Loyal’s courage, Delphy’s stability, and Creed’s change of heart toward his son had me wishing for a happy ending for this family.