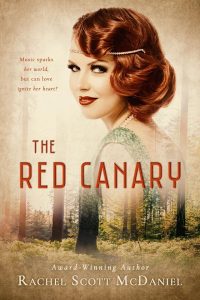 Music sparks her world, but can love ignite her heart?

In 1928, soot from the local mills and music from speakeasies linger in the Pittsburgh air. When the manager of The Kelly Club is found dead, nightclub singer Vera Pembroke is thrust into peril. As the only witness to the crime, she’s sentenced to hide away in the Allegheny Forest with a stuffy police sergeant as her guardian.

Sergeant Mick Dinelo harbors a burning hatred for Pittsburgh’s underworld after the devastation it left on his life—and heart. He should be out exposing culpable gangsters rather than tending to the impetuous woman who defies his every effort to keep her safe.

Mick and Vera must set aside their differences to solve the murder that someone wants to keep buried beneath the soot of Steel City.

Impeccable research, mystery and danger, a headstrong yet broken heroine, and a hero determined to do the right thing even when surrounded by corruption are a few of the things I loved about The Red Canary.

Rachel Scott McDaniel transports readers to Pittsburgh in the late 1920s and exposes the corruption in the city from the speakeasies to the police department. But it is her characters that steal your heart. While Vera puts on a good front of strength, she’s a wreck on the inside. The emotional baggage she carries from her childhood affects the person she is in present day.

Mick has his own demons he’s wrestling, but his determination to protect Vera is admirable and swoon worthy. These two butt heads at first, but through their time together, they learn to admire and respect the other.

The mystery and danger are interspersed throughout in just the right places to keep the plot from getting bogged down. McDaniel packs a lot into this story and proves she’s an author to keep an eye on.