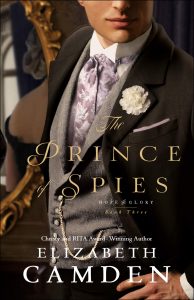 Luke Delacroix has the reputation of a charming man-about-town in Gilded Age Washington, DC. In reality, he is secretly carrying out an ambitious agenda in Congress. His current mission is to thwart the reelection of Congressman Clyde Magruder, his only real enemy in the world.

But trouble begins when Luke meets Marianne Magruder, the congressman’s only daughter, whose job as a government photographer gives her unprecedented access to sites throughout the city. Luke is captivated by Marianne’s quick wit and alluring charm, leading them both into a dangerous gamble to reconcile their feelings for each other with Luke’s driving passion for vital reforms in Congress.

Can their newfound love survive a political firestorm, or will three generations of family rivalry drive them apart forever?

Books in the Series 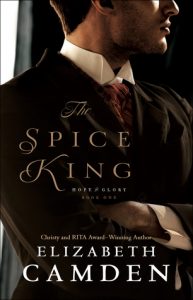 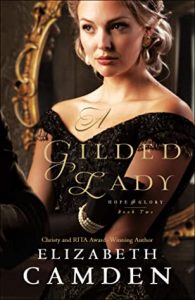 Elizabeth Camden is an expert at taking an obscure piece of history and making it interesting by weaving it into her stories. In The Prince of Spies, readers learn about the Food and Drug Administration’s human testing for chemicals in food and the man (aka The Poison Squad) who were the test subjects.

I really enjoyed that Luke and Gray had some scene time together. We learned a lot about Luke’s relationship with his twin sister in the previous book, so it was nice that much of the Delacroix sibling relationships in this book focused on the brothers.

On the surface, Luke may seem a brash and overconfident, but his heart is in the right place (which we see with his communication with Marianne). And Marianne herself is a complicated character—longing for the acceptance of her family but also somewhat naïve to the truth of their deeds. And of course, you’ve got the forbidden romance angle with the families standing firmly in different camps.

One other fun historical event is woven throughout the book: the planning of the Washington Mall. Camden conveys the differing opinions of what will become the place many of us visit today.

I was a fan of this series before the final book, but the way each story can stand on its own while also weaving the stories of Gray, Caroline, and Luke together throughout all three books strengthens my opinion. And don’t those covers look gorgeous together?