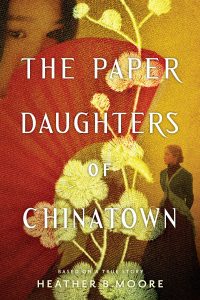 A powerful story based on true events surrounding Donaldina Cameron and other brave women who fought to help Chinese-American women escape discrimination and slavery in the late 19th century in California.

When Donaldina Cameron arrives at the Occidental Mission Home for Girls in 1895, she intends to teach sewing skills to young Chinese women immigrants, but, within days, she discovers that the job is much more complicated than perfect stitches and even hems. San Francisco has a dark side, one where a powerful underground organization–the criminal tong–brings Chinese young women to America to sell them as slaves. With the help of Chinese interpreters and the Chinatown police squad, Donaldina becomes a tireless social reformer to stop the abominable slave and prostitution trade.

Mei Lien believes she is sailing to the “Gold Mountain” in America to become the wife of a rich Chinese man. Instead she finds herself sold into prostitution–beaten, starved, and forced into an opium addiction. It is only after a narrow escape that she hears of the mission home and dares to think there might be hope for a new life.

The Paper Daughters of Chinatown throws new light on the age-old scourge of human trafficking. The heroes who fought this evil and the victims who triumphed over it more than a hundred years ago offer a bright example of courage and determination for anyone wishing for a better world.

I was never a huge fan of history class but give me an immersive novel that puts skin on the people of a place and time period, and I am wholly engaged. In The Paper Daughters of Chinatown, Heather B. Moore sweeps readers to the turn of the twentieth century San Francisco and a little-known and dark part of America’s history.

Donaldina “Dolly” Cameron’s plan to spend a year teaching sewing classes at the Occidental Mission Home becomes a lifetime of sacrifice, heartache, and bravery. Moore brings to life the dangers, risks, fears, friendships forged, and sadness Dolly experienced with the Chinese girls she rescued from slavery from the tong.

Through the fictional character of Mei Lien, readers also get a small (and tasteful) insight into what life for these young girls was like. With no hope of escape from their captors, forced in to drug addiction and prostitution, these girls saw little hope for their future.

I could tell Moore did a lot of research for this story and the author held it dear to her heart. I found myself tearing up through several parts of this book but am so, so grateful it was written—not only because it introduced me to a piece of American History I wasn’t at all aware of before but also because human trafficking is still happening. Evil people are still treating other human beings like possessions and slaves. We need more Dolly’s in this world.