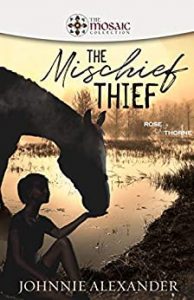 For con artist Chaney Rose, life hasn’t been easy. In desperate need of cash, she readily agrees to find Mischief, a stolen racehorse. Hunting for clues, she breaks into the suspected horse thief’s home only to be caught—with a few pilfered items in her pockets—by the police detective who’s tailing her.

By-the-book Adam Thorne was fired from his church because of his father’s involvement with the valuable thoroughbred. In a burst of Les Miserables-inspired grace, Adam tells the detective that he gave Chaney the stolen items.

Adam wants Chaney to find his missing father. When Chaney learns that Mischief’s owner intends to kill the racehorse, she needs Adam’s help expose the cruel plan before it’s too late.

Will a con artist with a conscience and a minister without a ministry risk imprisonment to do the wrong thing for the right reason?

I loved the television show Leverage and as I was reading Johnnie Alexander’s The Mischief Thief, I kept thinking of the show. Well, come to find out in the author’s not, Alexander is a fan of the show too.

This book is interesting in that it’s a mystery with a main character who is a grifter. Although Chaney has a conscience about her thieving, it is the way of life she has always know. Alexander creates a character who is both a bit immoral but also vulnerable which makes her likable.

While I was waiting for some romantic chemistry to happen between her and Adam, it never came. But the grace Adam shows Chaney is what she needs in her life. She needs someone to show her the love of God and the fallible love of humans.

Since The Mischief Thief looks like the first book in a series, I’m hoping we get to catch up with Chaney and Adam again soon.