Jim is a long-time resident of Chesterfield, Missouri…“The City of Sculptures”. He is a graduate of the University of Missouri in Columbia and now spends his time crafting novels of suspense that tackle the complex relationship between science and religion, stories designed to take the reader places he or she may not have previously considered.

She frowned at her empty travel mug. The flowering pink dogwoods probably hated the cold morning as much as she did. She just wanted to sleep for a day . . . or maybe a month. To click her heels together three times and return to Kansas. She shoved the mug into her coat pocket.

Grace forced herself to return his smile as a rush of warmth pushed back the pervasive cold.

“Yes it is.” Manny looked her over carefully. “You okay?”

“Yeah, I’m fine.” She eased down onto the cold steps next to him. “Who was that?”

“Becka. She’s worried about you.”

Grace shook her head. Too many people, too many worries. “You couldn’t go back to sleep either?”

After her mother’s call, Grace had stood in her apartment’s shower until the hot water had turned cold. But she hadn’t wanted to risk her bed—or sleep—again. “I’m sorry. I shouldn’t have woken you so early. It could have waited.”

Her eyes blurred as he moved closer to comfort her. “Nervous?” 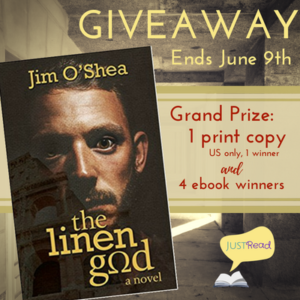 Ambassador International is giving away:

Enter via the Rafflecopter giveaway below. Giveaway will begin at midnight June 2, 2018 and last through 11:59pm June 9, 2018. Winners will be notified within a week of close of the giveaway and given 48 hours to respond or a new winner will be chosen.

Follow along with the blitz for more chances to win at JustRead!