Do you listen to audiobooks? I do when I’m at the office. I mean, I’d never stay up with my monthly TBRs if I didn’t listen to a handful of those. But once in a while I come across a book that has people looking at me whenever they walk by my cubicle because I’m smiling and laughing at whatever I’m listening to. Regina Jennings’ The Lieutenant’s Bargain was one of those books. 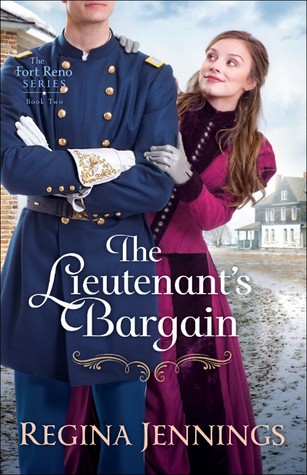 Hattie Walker dreams of becoming a painter, while her parents want her to settle down. As a compromise, they give her two months to head to Denver and place her works in an exhibition or give up the dream forever. Her journey is derailed when a gunman attacks her stagecoach, leaving her to be rescued by a group of Arapaho . . . but she’s too terrified to recognize them as friendly.

Confirmed bachelor Lieutenant Jack Hennessey has long worked with the tribe and is tasked with trying to convince them that the mission school at Fort Reno can help their children. When a message arrives about a recovered survivor, Jack heads out to take her home–and plead his case once more.

He’s stunned to run into Hattie Walker, the girl who shattered his heart–but quickly realizes he has a chance to impress her. When his plan gets tangled through translation, Jack and Hattie end up in a mess that puts her dreams in peril–and tests Jack’s resolve to remain single.

The misunderstandings with Hattie and Arapaho who rescue her, Jack and the Arapaho when he goes to rescue Hattie, and even Hattie and Jack are entertaining and hilarious. And even though it takes Jack and Hattie a bit too long to discover exactly what they got themselves into, readers catch on quick which just makes it even more enjoyable. Plus, you have Hattie who has the heart of an artist and Jack who is a by-the-book scholarly type. What could possibly go wrong?

As Jack and Hattie stick to the constraints of their bargain, they struggle to find the courage to let go of their insecurities and tell the other the truth in their hearts. And that journey is a blast to take with these characters Jennings created.