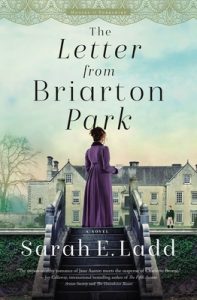 For this reader, Sarah E. Ladd’s books are either hits or misses for me, and The Letter from Briarton Park didn’t stand up there with other books by this author.

I do enjoy how Ladd captures the Yorkshire area of England and that we get a good mix of well-to-do and more common folk. And I felt for Cassandra as she goes searching for answers about her history only to hit numerous brick walls.

There were several people to keep track of. I think this was an attempt to keep readers guessing, but who was behind everything was extremely predictable to me, and this particular book seemed like a retelling of a couple of the author’s previous books with new characters and a new setting.

But this one book won’t deter me from trying again with the next book in the series in hopes of a win next time around.