For me, there are a couple of definite signs that a book is going to go on a favorites list. First, I want to know what happens to those characters after the book ends. Second, I immediately go back into the book and re-read parts of it. I found myself going back over many scenes in The Hesitant Heiress, the first book in The Everstone Chronicles by Dawn Crandall. And then there’s the little matter of not wanting to put the book down but you have to because you’ve got to work. Or sleep. Or care for you family. This new-to-me author blew me away with her first book and I cannot wait to read the other two she’s written thus far. Crandall immerses her readers in high society in the late 1800s and entertains from the opening page. 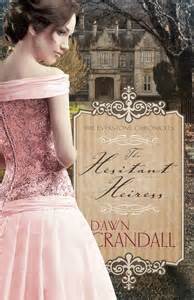 Amaryllis Brigham is forced to leave the Boston Conservatory of Music and move in with her aunt. When she learns that she is the sole heir of her grandmother’s will (a grandmother who she had never met), she is met with a stipulations she knows she can’t meet. She must marry within one year after finishing school. The problem is that Amaryllis never plans to marry. Her dream is to start a music school in her beloved state of Washington. Enter Nathan Everstone. A man who is intent on making Amaryllis uncomfortable and uneasy. A man whose father hates her. A man who she is inexplicably attracted to but cannot become involved with.

As Nathan works to gain Amaryllis’s trust, she meets others in Boston society, some friends and some enemies. When she learns the truth of who caused her expulsion from school, all of her prejudices against the Everstone family are called into question. Could she be wrong about them? And if she’s wrong about them, is a future with Nathan a possibility?

I am usually partial to romances written in third person because it gives me as a reader perspective into both the male and female main character’s heads and hearts. Crandall does such an amazing job of telling a story from only the female character’s point of view in first person, I didn’t miss the other perspective. In fact, it made the story more intriguing. As a reader, I couldn’t help but sympathize and even empathize with Amaryllis as she tries to find herself in a society she doesn’t want to be a part of. The interactions between Amaryllis and Nathan are sometimes humorous, sometimes touching, and always has that bit of tension between the two that makes you want to shake them and yell, “Just say it already!” The story moves along at a fast pace and introduces a few characters that will be prominent in future books. (The Hesitant Heiress and The Bound Heart are available now and The Captive Imposter will be available April 1).

To learn more about Dawn Crandall and her books, visit her website.