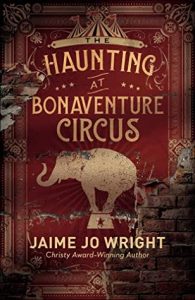 Strap in and sit back for another dual-time suspense that will keep you guessing until the very end with Jaime Jo Wright. This time the circus surrounds both the past and present-day mysteries.

I’m not sure whether I liked Pippa or Chandler better. Both of these characters are strong women who don’t see themselves that way. Pippa longs to know her true family and find a place where she belongs. Chandler is driven but brought low by an auto immune disease and fear of losing her son.

The Haunting at Bonaventure Circus contains Wright’s trademark sense of the eerie. Yet, by the end, there is a sense of justice and resolution for both Pippa and Chandler. There’s a touch of romance in there too—enough to appease us romance fans but not so much as to turn away those who prefer the romance doesn’t overpower the suspense and overall atmosphere of the plot.