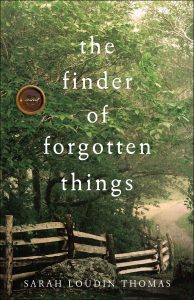 It’s one thing to say you can find what people need–it’s another to actually do it.

It’s 1932 and Sullivan Harris is on the run. An occasionally successful dowser, he promised the people of Kline, West Virginia, that he would find them water. But when wells turned up dry, he disappeared with their cash just a step or two ahead of Jeremiah Weber, who was elected to run him down.

Postmistress Gainey Floyd is suspicious of Sulley’s abilities when he appears in her town but reconsiders after new wells fill with sweet water. Rather, it’s Sulley who grows uneasy when his success makes folks wonder if he can find more than water–like forgotten items or missing people. He lights out to escape such expectations and runs smack into something worse.

Hundreds of men have found jobs digging the Hawks Nest Tunnel–but what they thought was a blessing is killing them. And no one seems to care. Here, Sulley finds something new–a desire to help. With it, he becomes an unexpected catalyst, bringing Jeremiah and Gainey together to find what even he has forgotten: hope.

Sometimes an author can take a difficult period in history (The Great Depression) and weave a story that captivates because of the setting, characters, and growth that happens throughout the book. The Finder of Forgotten Things by Sarah Loudin Thomas is one such book.

On the surface, Sully, Gainey, and Jeremiah don’t have a lot in common. But as readers get to know them, they learn that these three characters are all looking for something—family and a place to belong—and as we journey with them, we want them to find it. I especially enjoyed Sully’s change throughout the novel

Not only does Thomas deliver a book so full of hope and reconciliation during tragedy (there’s some good history about the Hawks Nest Tunnel disaster in West Virginia), she brings in a sense of nostalgia. The 1930s were a difficult time but they were also a time where neighbors helped neighbors and communities came together.