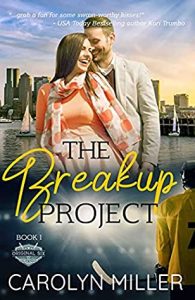 As the twin sister of hockey’s hottest forward, romance-loving Bree Karlsson is used to being ignored, leading to a New Year’s resolution to not date any athlete in her attempt to find Mr. Right. But what happens when the man who might prove to be her personal Mr. Darcy is her brother’s hockey-playing best friend?

Mike Vaughan might be happy playing in Boston, but he’d be even happier if Bree could one day see him as more than a good friend. He agrees to help Bree with a special project in the hope she’ll finally see him as something more. But when a misunderstanding ends in a Valentine’s Day disaster, Bree realizes that her breakup project may have broken her friendship with Mike in two. Can she ever redeem her mistake?

This friends-to-more romance has plenty of heart, humor, and swoon-worthy kisses in this first book of the Original Six, a sweet, slightly sporty Christian contemporary romance series.

My absolute favorite romance trope is friends to more, so I was already interested in reading The Breakup Project by Carolyn Miller. Then she added hockey to the mix, and this was a book that I had to read (because I am a hockey fan). If this first book is an indication of what the rest of the series will bring, I’m here for the entire season!

The friendship Bree and Mike have is evident from the get-go. But when a misunderstanding leads to some serious confusion, things get more complicated. Still, Mike is there for Bree when she needs him most…now she just needs to open her eyes and see that she needs him as more than a friend.

Miller does an excellent job of introducing readers to Mike’s hockey friends (who will be showing up in future books). And those who aren’t fans of hockey won’t be lost as the majority of the hockey talks is about who is playing who and where, but those of us who do love the sport also get some on-ice time.